Get started using VPN on your mobile devices

Protecting your online privacy and bypassing censorship by using a VPN on your iPhone, iPad, or Android device has never been more important.

With Proton VPN, you can stay private when browsing on your mobile devices using our free VPN apps for iOS, iPadOS, and Android. 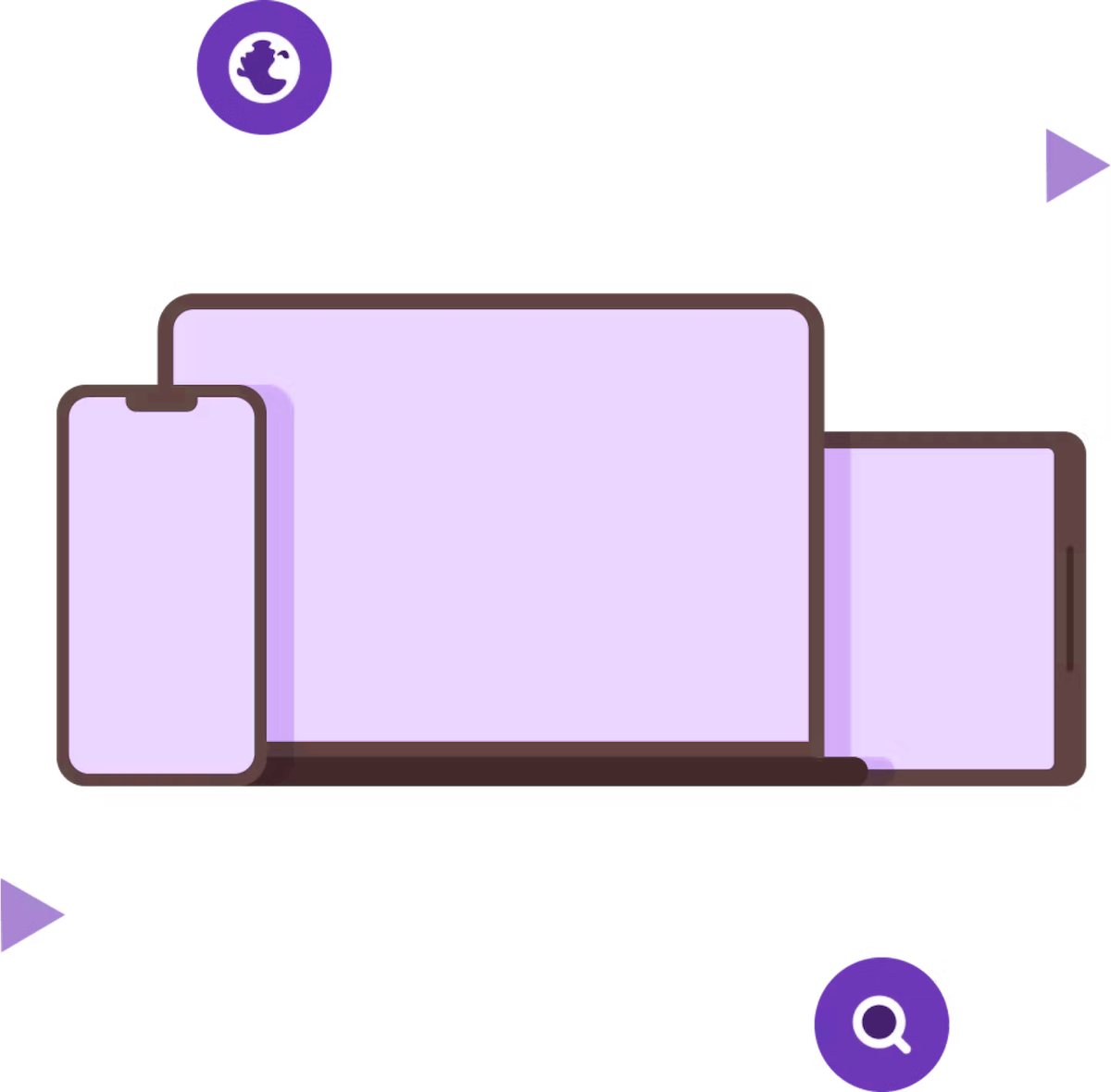 Why use a VPN on your mobile device?

As mobile device usage has overtaken desktop usage, protecting your mobile data from prying eyes has become more important than ever. A VPN prevents your ISP and mobile network provider from seeing your information, and so prevents untargeted mass surveillance by your government.

A VPN can help you defeat censorship by "spoofing" your location

swipe right or left to explore all values
Get Proton VPN

Get a secure VPN for Android or iOS

How to get Proton VPN for Android or iOS

Why use Proton VPN? 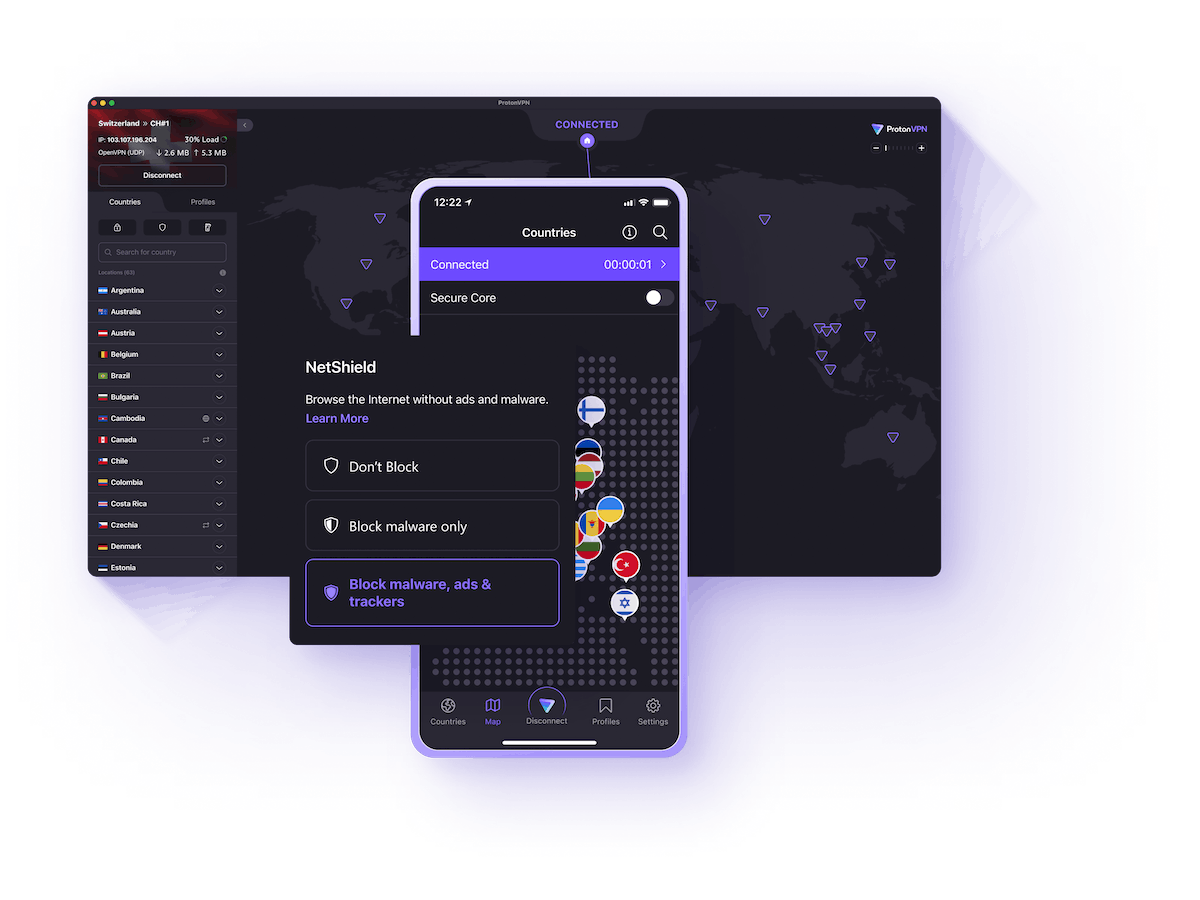 Use Proton VPN to connect a VPN server in another country to bypass local internet blocks and censorship. With over 1,300 servers in over 60 countries, our global network of servers ensures you can access blocked apps and websites no matter where you are. 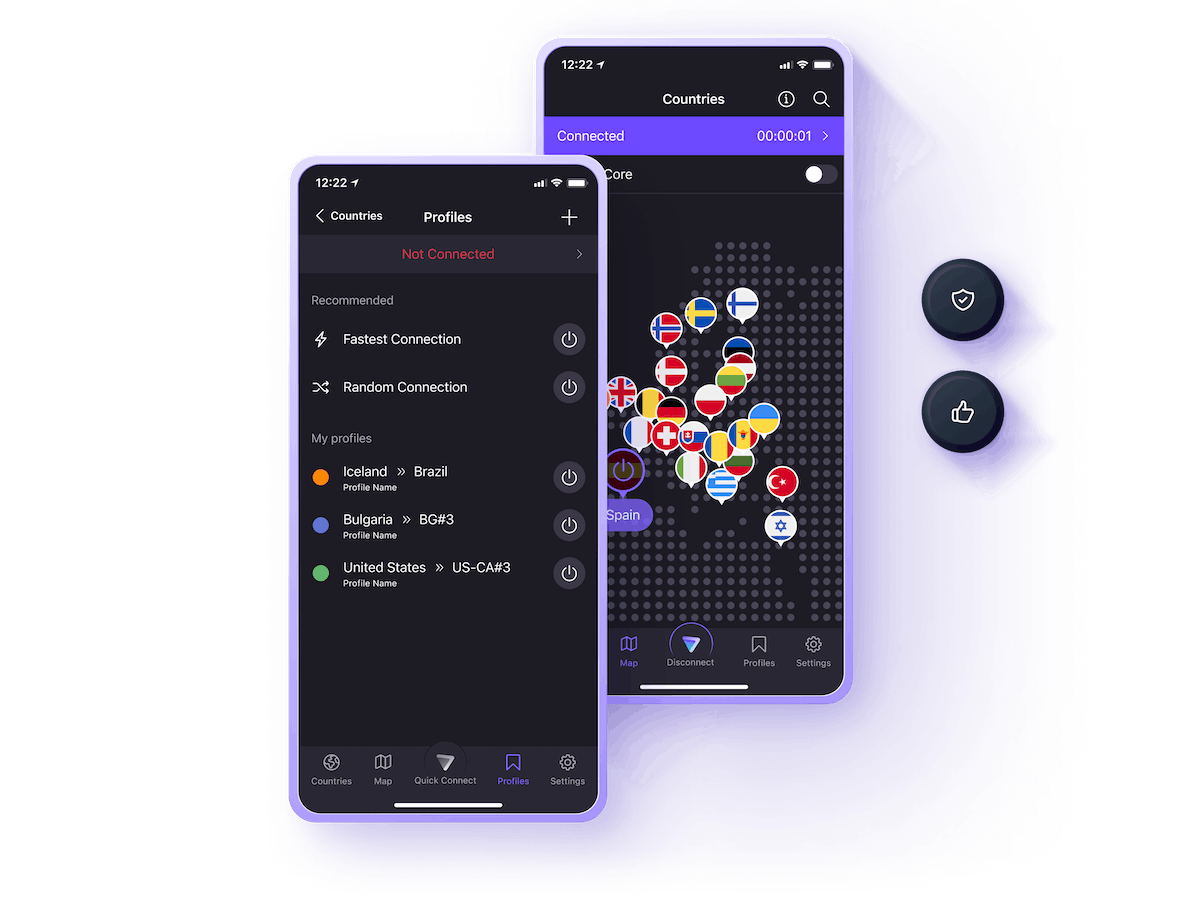 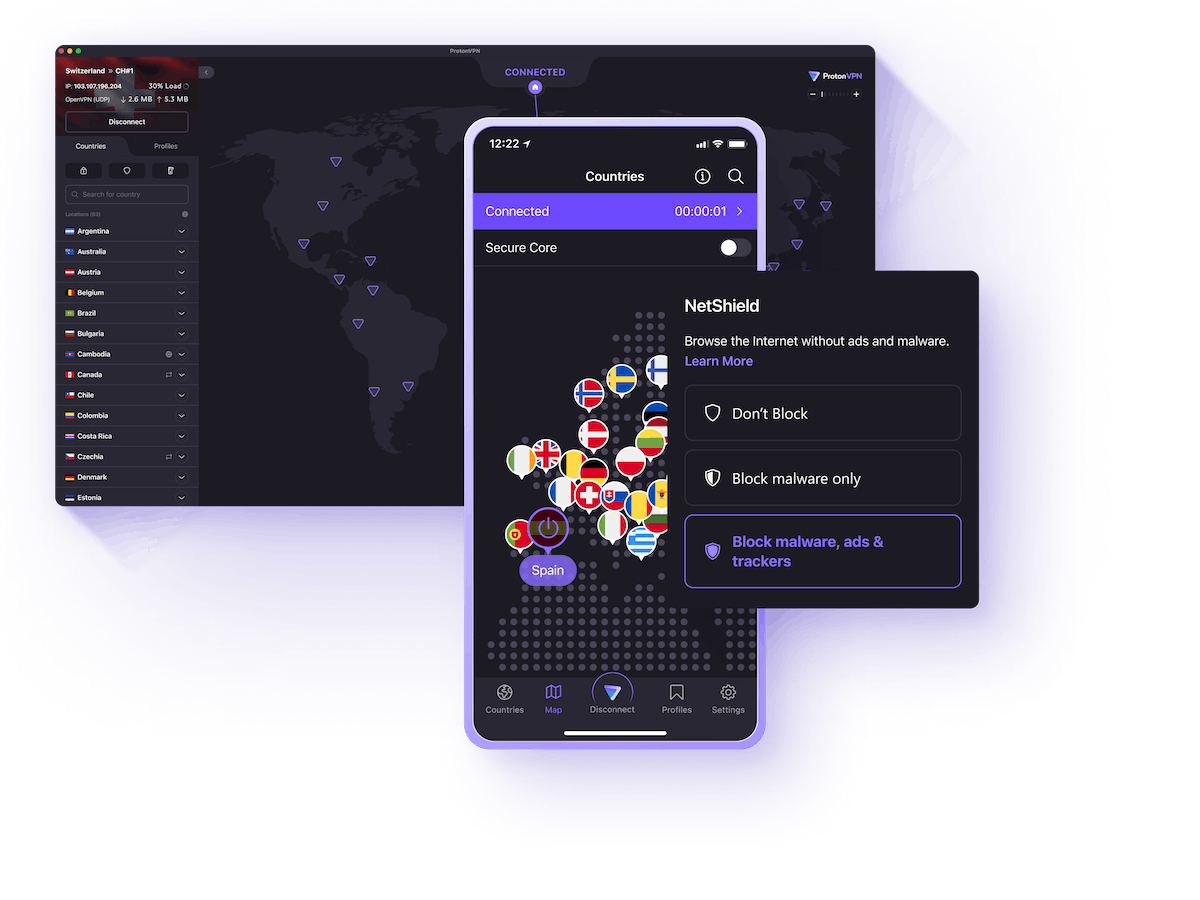 Get unlimited browsing with Proton VPN’s Free plan. We’re the only free VPN that keeps your online activity private without logs, ads, or malware. Our Free VPN plan allows everyone to unblock the internet and start browsing more freely. 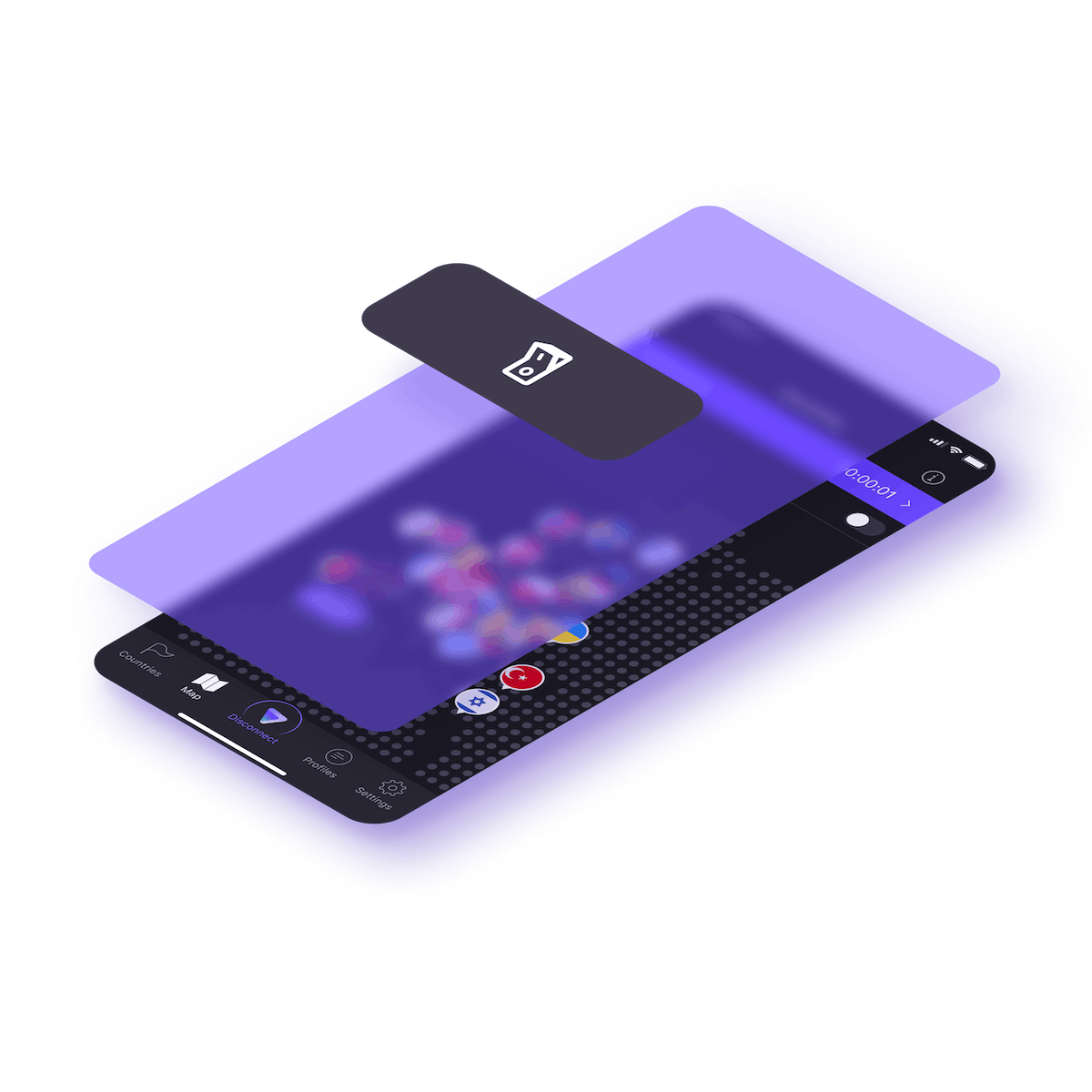 Proton VPN offers unparalleled speed performance thanks to our use of a combination of 10 Gbps servers, advanced VPN protocols like WireGuard, and VPN Accelerator technology that can improve the browsing speeds on your mobile by over 400%, even over long-distance connections. 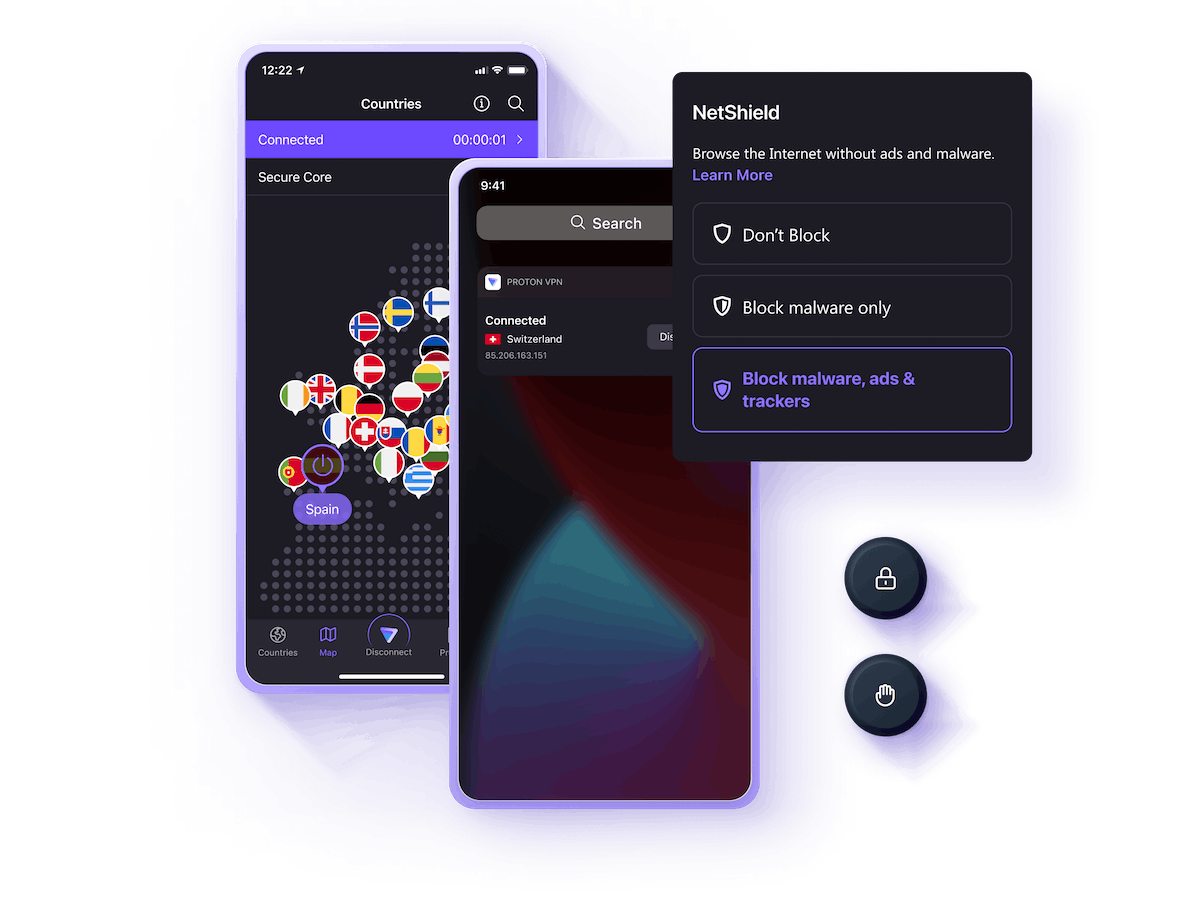 We are based in Switzerland, which has some of the strongest data privacy laws in the world

We use only the most secure VPN protocols, with strong encryption and forward secrecy

Our apps are fully audited and open source, so anyone can check them

swipe right or left to explore all values

If you connect to a VPN server fairly nearby, (for example, anywhere in Europe if you are based in Europe), it is unlikely you will notice any slowdown. In addition to this, our unique VPN Accelerator technology can increase speeds by over 400% under certain conditions and is particularly effective at mitigating speed loss when connecting to geographically distant servers.

Is a VPN secure?

Proton VPN uses the OpenVPN and WireGuard protocols for its mobile apps (plus IKEv2 in our iOS app), which experts agree are the most secure VPN protocols yet devised. We also implement these at their strongest encryption settings.

Our open-source apps feature kill switches to protect you against VPN dropouts, and built-in DNS and IPv6 leak protection ensure there is no possibility your privacy can be compromised.

Our servers are all “hardened” with multiple security layers and failsafes, in addition to using robust physical security measures. Where security is of paramount importance, you might like to consider using our special Secure Core service for additional protection.

Is using a VPN on my mobile device safe?

Using a VPN on your mobile device is completely safe as long as you use a trustworthy VPN app. Unfortunately, there are lots of untrustworthy apps on the App Store and Play Store that will keep logs of your activity and sell your data.

Proton VPN keeps no logs that can compromise your privacy, is based in Switzerland, home of some of the strongest data privacy laws in the world, uses only the strongest VPN protocols and encryption suites possible, and makes the source code of all our apps freely available for anyone to audit.

We have commissioned professional third-party audits of all our apps, the results of which are publicly available.

There are a number of reasons this can happen, and while Windows is typically the worst offender, it can happen on any platform. DNS leak protection solves the problem by using firewall rules to ensure no traffic can leave your device outside the VPN tunnel.

What is a no-logs VPN?

Proton VPN keeps no logs of your activities that could at a future point compromise your privacy.

Other than payment details, which are never tied to your online activities, Proton VPN keeps no logs whatsoever. And under Swiss law, we cannot be compelled to start logging.