What is Secure Core VPN?

Proton VPN has a Secure Core feature that improves user privacy and data security by mitigating some of the risks from a compromised VPN server.

A common method to expose VPN traffic is to compromise the server that handles your traffic. This risk is particularly acute for servers located in high-risk jurisdictions. To mitigate this risk, Proton VPN has Secure Core servers. This article provides an overview of the attacks and threats that Secure Core mitigates, how it achieves higher VPN privacy, as well as instructions on how to activate Secure Core in Proton VPN.

What does Secure Core protect against?

Proton VPN’s unique Secure Core architecture allows us to protect our users from network attacks that other VPNs cannot defend against. A classic VPN setup involves a client passing traffic through a VPN server en-route to the final destination. If an attacker can get control of the VPN server, or monitor the network of the server, they will be able to match VPN clients with their traffic, nullifying the privacy benefits of the VPN.

Such timing/correlation attacks are not difficult to accomplish. In countries with restrictive Internet regulations (China, Russia, Iran, Turkey, etc), or countries with broad surveillance powers (USA, UK, etc), state surveillance agencies typically have the legal ability to coerce either the VPN provider, or the network/server provider of the VPN provider, to assist with such network monitoring. Therefore, even though Proton VPN is based in Switzerland, we cannot be certain that authorities are not monitoring our VPN servers located in those high-risk countries.

Secure Core allows us to defend against this threat to VPN privacy by passing user traffic through multiple servers. When you connect to a server in a high-risk jurisdiction like the US, your traffic will first go through our Secure Core servers. Therefore, even if an attacker monitors our servers in the US, they would only be able to follow the traffic back to the edge of our Secure Core network, thus making it far more difficult to discover the true IP address and location of Proton VPN users.

These measures provide us with a much higher level of certainty that no one has tampered with our Secure Core servers. While there is no such thing as 100% security, Secure Core is just one of the many ways Proton VPN delivers better security and privacy by protecting against complex attacks other VPNs cannot defend against.

How do I activate Secure Core?

Secure Core is a feature available on all paid Proton VPN plans and can be activated as follows:

Please note that not all countries can be connected to from all of our Secure Core locations.

1. Open the Proton VPN app and toggle the Secure Core switch on. 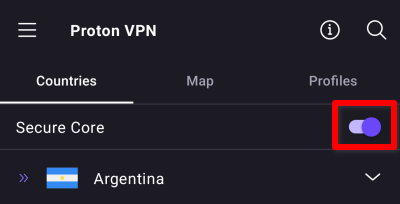 2. Tap on a country you wish the VPN to exit from, and then tap the on button next to the Secure Core country you want the connection to be routed through. 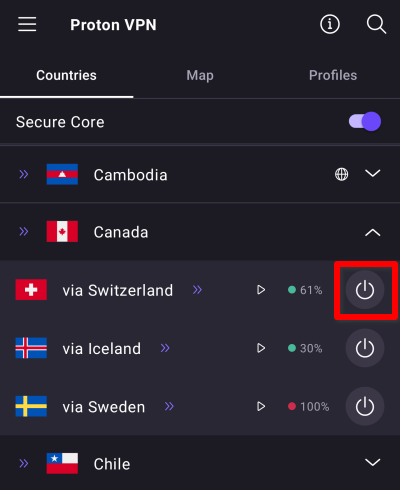 Please note that not all countries can be connected to from all of our Secure Core locations.

Step by step guide to Proton VPN on MacOS

Step by step guide to Proton VPN on Linux