Posted on March 13th, 2019 by Richie Koch in Service Updates. 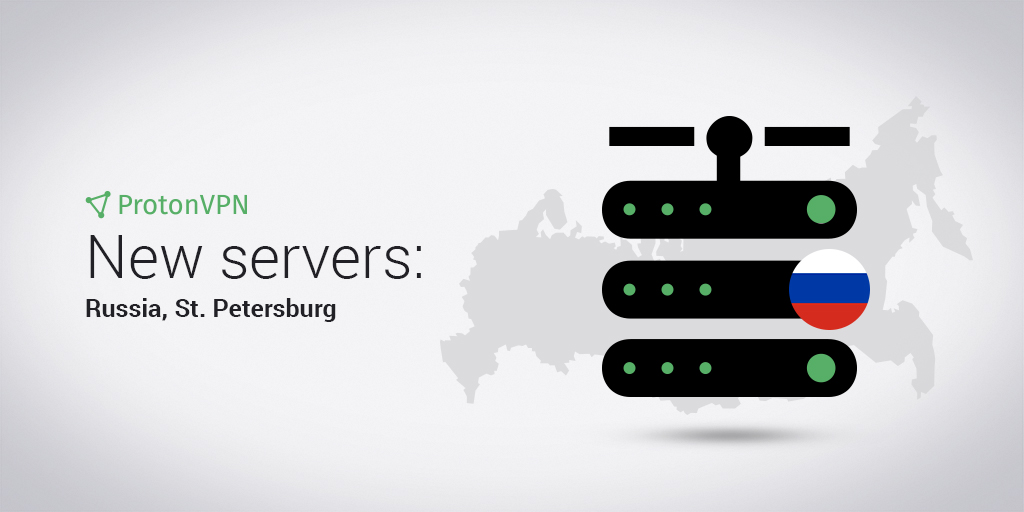 Russia is the 32nd country to join the Proton VPN network. These servers will offer secure and private Internet access to the largest country in the world.

VPN servers in Russia can provide access to content that is only available to someone using a Russian IP address, and also provide VPN users in Russia lower latency when they use Proton VPN. In order to provide better connectivity to the rest of our European network, our Russian VPN servers are located in St. Petersburg. This will also reduce the latency in the connection between these servers and our Secure Core servers in Iceland.

The following servers are available to paid Proton VPN users.

RU #3 & 4 are available on our Plus and Visionary plans

If you are not a paid user of Proton VPN, please consider upgrading to Proton VPN Plus to get access to servers in over 30 countries, Secure Core VPN for enhanced privacy, and advanced features like support for BitTorrent and other P2P protocols, and secure streaming of your favorite Netflix and Hulu shows.

You can help support our efforts to expand online privacy and security and access these additional features by signing up for a paid plan today.

Russia has poor online privacy protections, and we advise any of our users who have questions about the safety of our Russian VPN servers to read our post addressing how to use VPN servers in high-risk countries.

The launch of these Russian VPN servers does not change Proton VPN’s legal status or our stance towards user privacy and security. Consistent with our policy when it comes to high-risk countries, we are relying upon third party infrastructure in Russia, and will not maintain any of our own staff or infrastructure in Russia. This keeps our status as a Swiss company secure, and means we are not subject to Russian jurisdiction.

Proton VPN has a set of policies and guidelines for servers in higher-risk locations that make it more difficult for a foreign authority to compromise the privacy of Proton VPN customers. For example, we use trusted infrastructure partners, provision our VPN servers on our own, and only use bare metal servers. Details about these policies can be found here.

For our VPN servers in St. Petersburg, in addition to our standard security measures, we have also added a few extra layers of protection. First, network traffic is encrypted between the server itself and upstream ISPs, making it more difficult to intercept traffic between those two points. Furthermore, by peering in St. Petersburg, where the Russian Internet meets the rest of the world, we can connect directly to European ISPs, which, again, makes it more difficult to perform traffic interception.

None of these measures are foolproof however, so if the Russian government is part of your threat model, we recommend you either avoid the Russian VPN servers entirely, or use our Secure Core feature when connecting to any of our servers in Russia.

When using our Secure Core feature, your Internet traffic is routed through multiple servers, including hardened servers that are controlled and owned by Proton VPN. With Secure Core, even if the exit VPN server in Russia is compromised, your traffic can only be traced back to the Secure Core server, keeping your true IP address private.

Proton VPN is a secure, community-supported VPN service. It was developed by the same team of scientists that met at CERN that created Proton Mail, the world’s largest encrypted email provider. We offer the only free VPN service that does not have limit your data, throttle your connection speed, subject you to privacy-invading ads, or log your online activity. To join today, click the signup button below. If you already have an account and want to upgrade to access our VPN servers in Russia, click upgrade.

Protect all your devices

Proton VPN works on various desktop and mobile clients: Android, Windows, macOS, Linux, and iOS. You can download all our native apps here.

Our mission is to make a secure and private Internet that is accessible to everyone. Thank you for your support. Keep an eye out for new developments on our social media pages below.