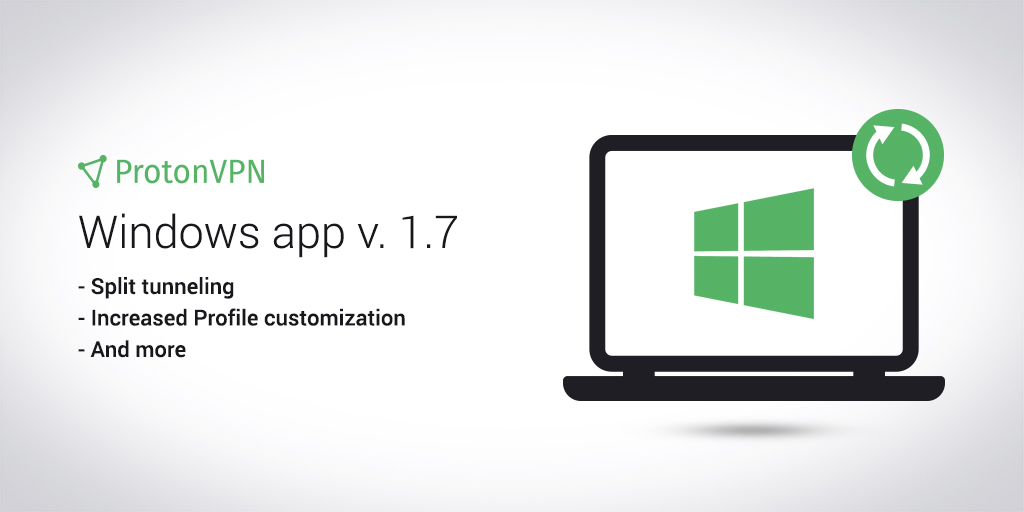 The newest version of Proton VPN for Windows supports Split Tunneling, allowing you to decide which applications should use the VPN encrypted tunnel. There are also more profile options and OpenVPN ports.

With Split Tunneling, you can protect your private data with VPN encryption and still access public networks at the same time. By activating Split Tunneling, we will route all of your Internet traffic through the encrypted VPN tunnel except for the apps and the destination IP addresses you select. By excluding non-sensitive data from VPN encryption, you will reduce latency and be able to access foreign and locally geo-blocked content at the same time.

and then select the Advanced tab.

Once you turn Split Tunneling on, you will be able to select which apps and IP addresses to exclude from the encrypted VPN tunnel. For more details, see our Support article.

You can now write longer names for your Profiles (up to 25 characters), and select new options for profile colors. Profiles are also now saved to accounts rather than devices. This means that your saved profiles will be automatically accessible on other devices that run Windows when you sign in to the Proton VPN app.

Beginning with version 1.7, the Windows app will randomly select an OpenVPN port — and it has a greater selection of ports. Not only does this provide better load balancing (leading to better performance), it also offers better protection against VPN blocking. Now, if the first port selected is blocked, the app will automatically fall back to the next randomly selected port.

Sign up for a Free plan for Windows and download version 1.7 (or the latest version) of our Windows app on our site.

We’re excited about these new features in the latest version of Proton VPN for Windows. Please join us on Facebook, Twitter, and Reddit, and let us know you what think!