Posted on July 3rd, 2019 by Richie Koch in Service Updates. 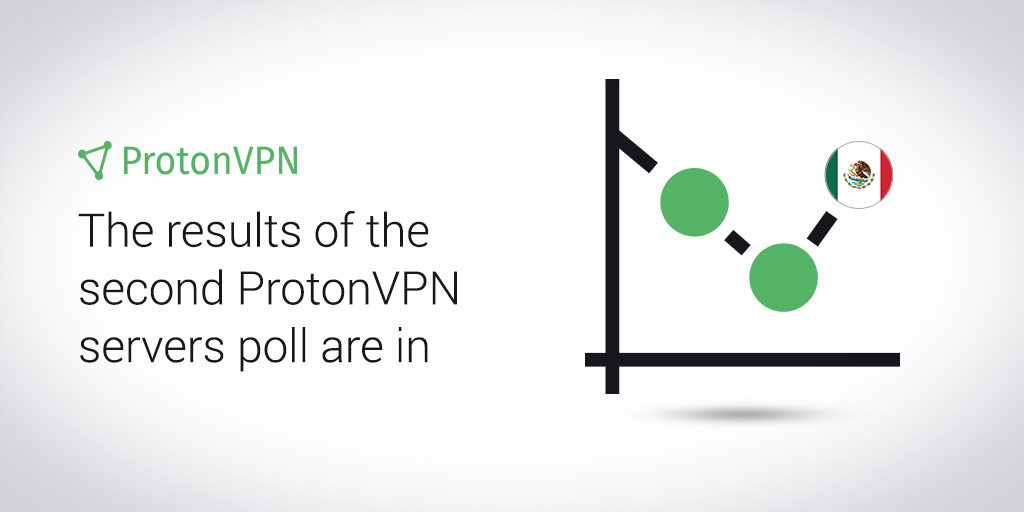 On May 30, we held our second poll to ask you where you want us to install new VPN servers. Thousands of you responded, and today we are ready to announce the results.

Thank you to everyone who participated in our second VPN servers poll! We’re serious about serving our community, and we try to involve you in our decision process wherever possible. In this case, almost 5,000 people voiced their opinion in our latest poll, which asked where you want us to prioritize new servers. We have tallied the results, and we are already working on adding new servers in the countries you deemed the most important.

Learn where we already have VPN servers. Check out the results of our first VPN server poll in 2018.

We will announce each new server as soon as it comes online on our social media channels, so keep an eye on our Twitter feed and Facebook page.

Below are the results from the second Proton VPN community survey:

As we continue our aggressive expansion, we will target the countries that received the most votes first. However, there is a good chance that as new VPN servers come online, they will not be in precisely the order of the countries listed. There are two main reasons for this:

First, our users’ security is always our top priority. If we are not confident we can keep your data secure, we will not take the risk. Security considerations are especially relevant when looking at installing VPN servers in China. However, we recently installed servers in Russia, so we know how to install and maintain VPN servers in a high-risk country. You can read more about some of the precautions we take to secure servers in high-risk countries.

Thank you again for participating in this poll and helping to shape the future of Proton VPN. As we work to make online freedom and privacy accessible to all, your support and feedback are invaluable.

Proton VPN is a community supported VPN service created by the same team that built Proton Mail, the world’s largest encrypted email provider. Signing up is easy. Click the signup button below to get started. If you already have an account and want to upgrade to access the many new VPN servers on the way, click upgrade.

Thank you to those of you who subscribe to a paid plan with Proton VPN. Installing these new servers and coming that much closer to providing a secure and private Internet to all would be impossible without your support.