Posted on April 30th, 2019 by Ben Wolford in Service Updates. 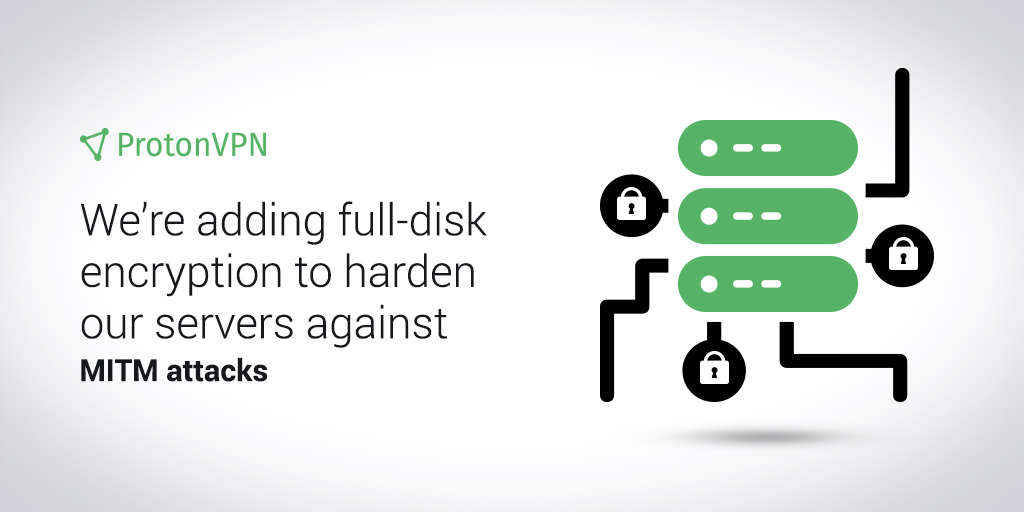 UPDATE: As of February 2020, we have applied full-disk encryption to all Proton VPN servers.

Attacks from nation states may not be part of your threat model, but they are part of ours. We’re happy to announce an important security upgrade that will help mitigate certain resource-intensive attacks that can come from unfriendly governments in the countries where we have exit servers, such as Russia. With full disk encryption, Proton VPN will be safer from sophisticated man-in-the-middle attacks.

Why disk encryption is important

When you connect to Proton VPN, you are establishing an encrypted tunnel between your device and one of our servers around the world. While this prevents surveillance on your local network and at the level of your Internet service provider, it theoretically gives Proton VPN the ability to see your activity. (Hence why it’s crucial to use a trustworthy VPN.) Proton VPN does not keep logs of your activity, so there is virtually no information about our users saved on our servers that could be divulged to governments in the countries where we operate.

This is not an easy attack to pull off, but a government could do it. As we expand our VPN service to even more countries, including high-risk countries, we are taking precautions to ensure Proton VPN users can continue to browse safely. This includes disk encryption, which secures all the configurations and software contained in each exit server (including server certificates). That way, even if a server is compromised, the attackers will not be able to access it.

What this means for you

Disk encryption won’t change anything about your Proton VPN experience. All users will benefit from this security upgrade without any action required.

During the transition to disk encryption, there will be some temporary outages as we reboot each exit server in turn. The majority of users won’t notice any down time. If you do, simply switch to a different VPN server. You can also enable kill switch (if supported on your device) so that even if your VPN connection drops, your device is blocked from sending unencrypted traffic over the network. Full disk encryption is already active on Proton VPN’s Russia servers, and we will be rolling out this upgrade across our entire fleet of servers.

If you have any questions about disk encryption in Proton VPN, feel free to join the conversation on Reddit or Twitter.