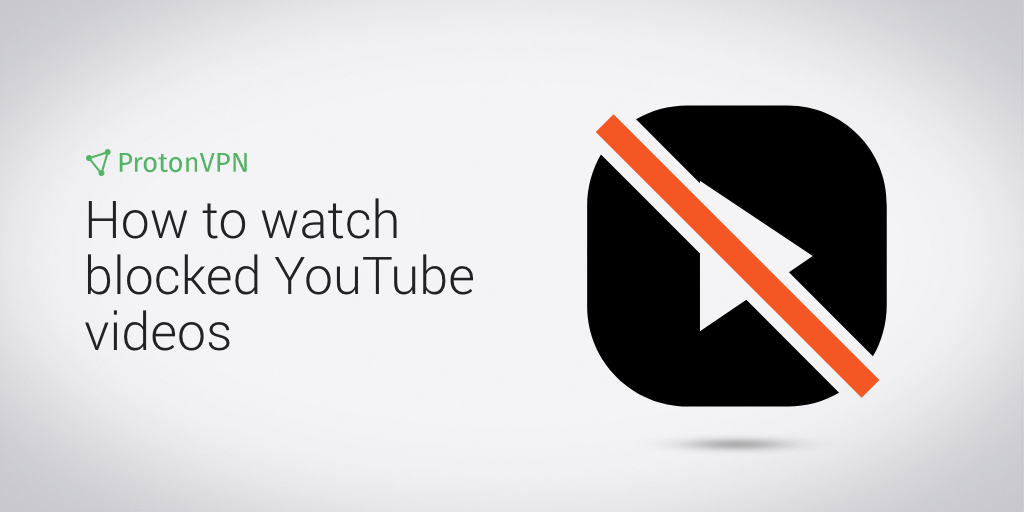 YouTube is a global platform that attracts over two billion unique users every month from all around the world. Unfortunately, this does not mean that everyone can access every video on YouTube.

Depending on the country you are in, certain videos are blocked. This is because YouTube uses your location (tagged by your IP address) to determine which videos you can watch. This is called geoblocking or geo-restricting.

If you have tried to use YouTube while on vacation or living abroad, you will likely be familiar with YouTube’s geo-restriction error message, “The uploader has not made this video available in your country” that occasionally pops up when you try to access videos you watch in your home country.

However, as with other types of geo-restrictions, there are ways to unblock YouTube videos and enjoy all the content on the platform.

At Proton, we believe that the internet is best when you have the freedom to express yourself and exchange ideas. This freedom is undermined when corporations like YouTube impose geoblocks on content. ProtonVPN is a firm defender of freedom of speech, and we condemn online censorship in all its forms.

The fastest, easiest, and most reliable way to unblock YouTube videos is to use a VPN. Using a VPN lets you connect to a server in another country and change your IP address to make it appear to YouTube that you are watching videos from that country. By connecting to a server in a country where the videos you want to watch are not blocked, you can successfully bypass geo-restrictions on all YouTube videos.

Depending on the video, it may be obvious which countries it is available in, or you may need to try a few different locations to find one that works. For example, Saturday Night Live (SNL) is an American television show that geoblocks its most recent videos on YouTube for anyone outside of the US. As you would expect, connecting to a US server will make those videos available. However, it may not always be so obvious which country you need to choose to unlock a specific YouTube video.

Using SNL as an example, you can see the extent to which some YouTube channels geoblock their content by looking at how many more videos are available when connected to a VPN server in the US.

By using a VPN to bypass geo-restrictions on YouTube videos, you will:

You should note that a VPN can see all your online activity while you are connected, which is why you should only use trustworthy VPNs with a no-logs policy, like ProtonVPN.

Learn more about how VPNs work.

Although using a VPN is generally the best way to unblock YouTube videos, you do have other options.

The Tor Browser is a powerful privacy tool that you can use to hide your IP address. It lets you send your internet traffic over the Tor network, a web of special servers around the world. The Tor Browser encrypts your internet traffic three times and then routes it through three different servers, making it almost impossible to trace, so YouTube is unable to know your real IP address and can’t geoblock videos for your location.

The average YouTube user would be better served simply using a VPN, which makes selecting a country to browse from quick and easy. However, you should use Tor Browser to unblock geo-restricted YouTube videos if you think there would be dire ramifications if local authorities found out you were watching this video. While it is a somewhat complicated procedure, you can also set which country the final Tor server is in. There are three main reasons you should avoid using Tor to stream YouTube:

A proxy server also allows you to browse the internet as though you are in another country by connecting you to another server. The proxy server hides your IP address from your destination site similarly to a VPN. However, proxies should generally be avoided because they can:

Secondly, proxies do not add extra encryption to your traffic like a VPN. In fact, in many cases, free proxies ban HTTPS traffic. This means that not only is your data vulnerable to being intercepted and read, but the proxy service can track your activity while you are connected to it. Also, free proxy connections are usually less stable and slower than a VPN connection.

There are some instances where YouTube is blocked altogether, rather than individual videos. This can happen in countries with strict censorship practices or if you use a network that blocks YouTube using a firewall (for example, at work or school).

Some countries, like China, Iran, and Turkmenistan, have blocked YouTube entirely. The reasons provided for blocking YouTube include protecting citizens from harmful content, national security, or for morality reasons. Depending on the methods that country uses, a VPN may or may not be effective.

Many schools and workplaces use firewalls to block certain websites like YouTube to remove distractions or increase productivity. However, there are many cases where access to YouTube videos is necessary in these environments — especially for educational reasons.

You can still use a VPN to bypass these restrictions on accessing YouTube, as the VPN will hide your internet traffic from the firewall.

A VPN encrypts your internet traffic and routes it through a server in another country, making it appear as though you are browsing the internet from that country. Your device’s IP address tags your general location (city and ZIP code) that websites then use to geo-restrict certain content. If you use a VPN, your IP address is changed to one in another country, meaning those websites can no longer block content based on your true location.

You do not need to pay for a Plus plan to unblock YouTube videos. You can sign up for a ProtonVPN Free plan and connect to servers in the Netherlands, the USA, or Japan. If you want to access content that is restricted in the countries where we have Free servers, you will need to sign up for a ProtonVPN Plus plan. The ProtonVPN Plus servers also typically have less load and provide faster YouTube streaming than our Free servers do.

The process for unblocking geo-restricted YouTube videos on your mobile device is much the same as it is for unblocking content on your desktop. ProtonVPN has apps for both iOS and Android devices. Once you have downloaded and installed the correct app for your device, you can simply connect to a server in a country where the video you want to watch is not blocked, and then use the YouTube app on your device to watch the video of your choice.