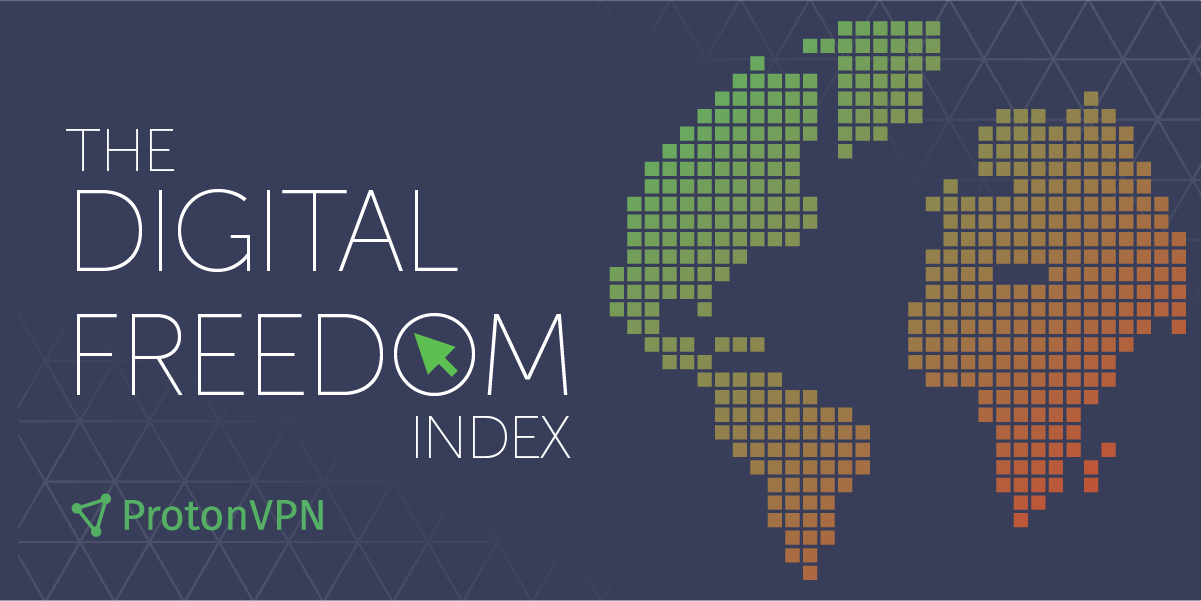 Which countries have the most digital freedom?

Digital freedom is something that much of society takes for granted, but, unfortunately, online liberty doesn’t exist for everyone. Your ability to use a VPN, access social media, or even read freely and fairly reported news in the media is entirely dependent on the laws governing the country you live in. This leads to a fractured world where the level of digital freedom can vary wildly from country to country.

To demonstrate how government decisions can impact people’s ability to access the internet, and read and publish digital media, we created the Digital Freedom Index. The team have used publicly available data from Reporters Without Borders (RSF) and Freedom House to find out which countries have the most media freedom and which impose the most restrictions on their internet usage.

What makes this index unique is that we additionally analyzed how free people in a given country are to access networks, websites, and online tools — such as VPNs and social media.

The following seven categories were analyzed and weighted equally to create our Digital Freedom Index:

Below you can find the most and least digitally free countries, according to our index:

According to the index, Sweden enjoys the most digital freedom of all the countries analyzed, with high scores across all seven of the categories we examined.

The United Kingdom and United States are notably not in the top 10. The UK just missed out, placing 12th while the US came in at 14th. Their overall scores were mainly affected by their lower than average violation of user rights scores. This category reflects the balance between legal protections and restrictions on free expression, surveillance and privacy, and the legal and extralegal repercussions for online speech and activities (such as imprisonment, extralegal harassment and physical attacks, or cyberattacks).

China, Cuba, and Russia took the bottom spots of the index, with all three countries having tight regulations and restrictions around media freedom, VPNs, and social media.

Sweden, Germany, and Portugal are the top countries for media freedom

Countries with high media freedom scores are places where journalists can report freely on matters of public interest, an essential part of any democracy. A high level of media freedom means journalists can be critical of the government and truthfully cover failures within society without being restricted by leaders or elites.

Our team used the Reporters Without Borders’s (RSF) media freedom score to look at how free the press is to operate within a given country. Their freedom scores are based on journalist information obtained across 180 different countries. RSF asked the journalists 87 questions that have been put together by their team of experts to determine a country’s level of media freedom.

Sweden received the highest score for media freedom from RSF. Sweden is known for being the first country in the world to pass a press freedom law in 1776, a law that still stands today.

Though Germany’s score declined slightly from last year, the country still comes in second place for media freedom, as freedom of the press is guaranteed and protected by law.

Myanmar, Ethiopia, and Cuba rank as the worst countries for internet accessibility

The ability to simply access the internet is an often overlooked component of digital freedom. The media will often report when governments unilaterally shut down the internet within their country. However, if a country’s internet is otherwise open and uncensored but the majority of its population cannot access it because there is insufficient infrastructure or an internet connection is too expensive, the internet is still effectively blocked. Obstacles to accessing the internet can be a huge issue when it comes to freedom of speech.

Iceland, Estonia, and Canada scored highly in this category as the vast majority of their populations have internet access, do not face obstacles using social media sites, and rarely encounter unaffordable paywalls or restrictions.

On the other end of the rankings, countries such as Cuba, Ethiopia, and Myanmar had the lowest scores of countries where this data was available.

Cuba only legalized private WiFi in homes and businesses in 2019 — and even now Cubans must obtain a permit to access the country’s internet, which is reportedly expensive and unreliable. In Myanmar, the military has ordered an internet shutdown, meaning most people have no access at all.

VPNs are banned in over 10% of countries, including Belarus, Turkey, and the UAE

At ProtonVPN, we track the countries where it is illegal to have or use a VPN.

Belarus made the move to ban not only VPNs but all internet anonymizers in 2016, including proxies and Tor. The country’s internet freedom has declined ever since, with the government blocking internet access, interfering with the free press, and obstructing its citizens’ right to free speech.

Turkey has also banned VPNs. Given that the Turkish government heavily regulates online content, blocking thousands of websites and removing YouTube videos, it is not surprising that it banned VPNs, which are effective tools for accessing blocked content.

The UAE’s rules around VPNs have changed in recent months, but the government still keeps tight controls on internet usage. Connecting to a VPN is not illegal in all circumstances, but if you use one to access a site that is blocked or banned in the UAE, you can still face a hefty fine.

Less than 60% of countries have “full” social media freedom

Of the 70 countries in the study, only three currently have a blanket ban on social media: China, Myanmar, and Cuba. In China, for example, the government restricts access to large portions of the internet and closely monitors its citizens’ online activity. It is also willing to impose harsh jail sentences on anyone who violates the law or accesses restricted content. Digital access in these countries is much more restricted than it is in the majority of countries worldwide.

Despite the harsh government restrictions, activists, dissidents, and everyday citizens in these countries do get around social media blocks using VPNs, software programs such as Ultrasurf, Psiphon, and Freegate (software that bypasses internet censorship and firewalls using HTTP proxy servers), or even inserting new IP addresses to host files.

Just under 60% of the countries in the study have “full” social media freedom (e.g., little to no restrictions on freedom of speech and content), including most European countries, Australia, and the US.

There have been talks in the UK and EU about regulating social media more carefully via laws, but these decisions have come under scrutiny with the fear that putting these laws in place would affect freedom of expression. Some critics of these proposed laws even argue that they would be a new form of censorship.

Below you can find our full Digital Freedom Index visualized in a heat map depicting which countries have the most and least digital freedom:

ProtonVPN analyzed data from a variety of different sources to find out which countries around the world have the most digital freedom.

The data was found via desk research using the sources below and each country was scored out of 10 to create the rankings within this index.

For VPNs and social media:

Note: Some countries were scored 0 in categories where information was unavailable