Are VPNs legal? A country-by-country guide. 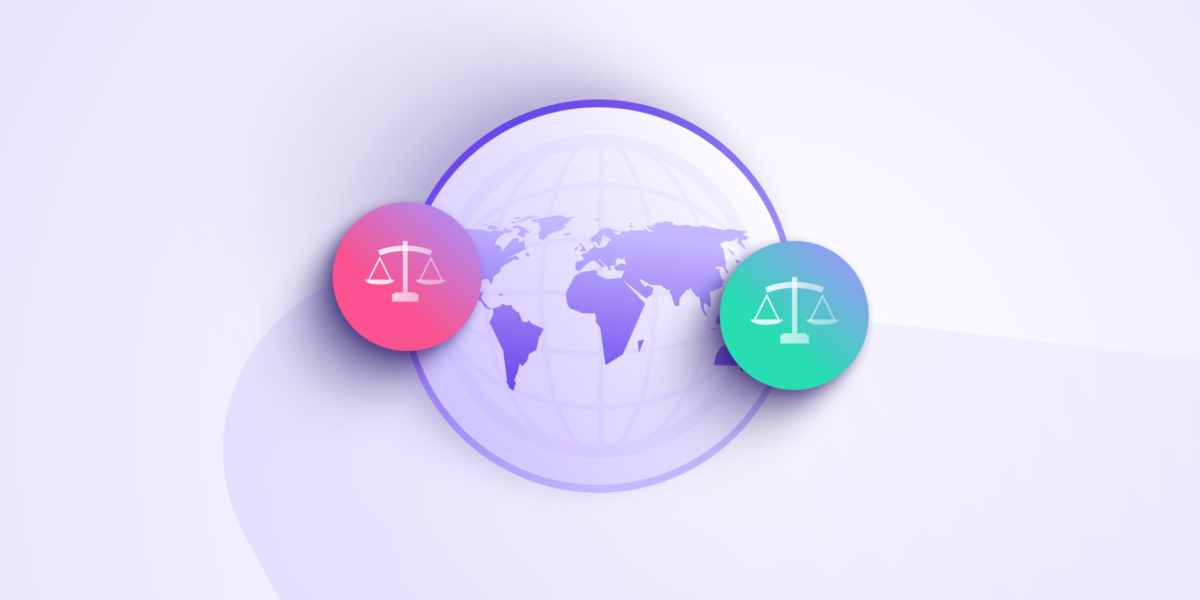 VPNs keep your online activity private and unrestricted. Some countries with repressive governments have outlawed VPNs in an attempt to maintain control.

Using a VPN helps you to evade all but the most sophisticated efforts to regulate the internet and censor information. That is why repressive governments around the world have been making efforts to block or ban VPNs. However, such legislation is generally unpopular and hard to enforce, which steers most countries away from outright bans.

Rather than try to ban VPNs altogether, many countries simply try to block access to known VPN service providers. While this is difficult, it can be done if governments are willing to dedicate resources to the task.

This post includes a list of the countries where VPNs are banned or blocked, and explores your rights to browsing privately.

How do governments block VPNs?

When you use a VPN, your internet traffic is protected because it is encrypted and routed through the VPN server, obscuring your IP address. This traffic can be stopped by blocking ports that are used by some VPN protocols, such as PPTP or L2TP or outright blocking the IP addresses of VPN services.

Proton VPN does not use PPTP or L2TP. We only use protocols which are known to be secure OpenVPN, IKEv2, and WireGuard.

The most sophisticated tools, like deep packet inspection, can actually identify VPN protocols in packet metadata, allowing countries like China to find and block VPN servers in a more automated and targeted fashion. Countries that are not worried about the economic impact of blanket internet censorship, like North Korea, have simply blocked access to all overseas IP addresses.

Other countries that do not have the technology to block VPNs have passed legislation that outlaws VPN services that are not registered with the government. The most repressive countries have made all VPNs illegal and instituted severe punishments for those who are caught, hoping to scare people away despite the technical difficulty of detecting VPN traffic.

Where are VPNs illegal? 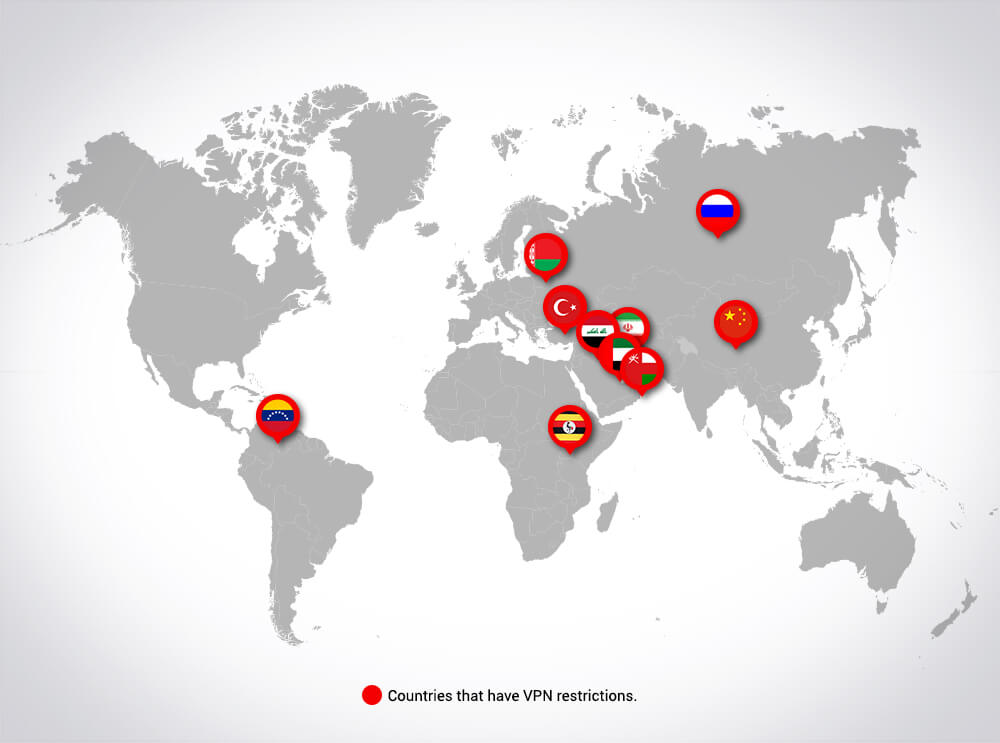 VPN illegality isn’t always as clear cut as having a single law against their usage. Countries with strict internet censorship laws, for example, may de facto ban VPNs as part of their restrictive controls on how citizens can use the internet. These countries are listed below as Uncertain status countries.

Other countries may not make VPNs illegal outright, but instead they will block VPN servers or force ISPs to prevent their customers from accessing VPNs. Countries where VPNs are blocked or banned by ISPs, despite not being outlawed, are listed under Countries that have blocked VPNs.

Certain countries have very strict internet censorship laws, meaning that using a VPN within that country can come with risks, even if there is not a known legal ban. Countries with these kinds of censorship laws include:

Countries that have blocked VPNs

The countries below have placed technological restrictions on their citizens’ ability to access the internet in order to block VPNs or discourage people from using one.

Myanmar has been ramping up its internet censorship in the wake of the February 2021 military coup. This has included restricting internet access for Myanmar’s citizens down to a handful of “whitelisted” websites. The military rulers have ordered ISPs to block access to VPNs to prevent people from skirting these internet restrictions.

The use of a VPN connection in Turkey can also mark you out as a person of interest for law enforcement. Despite this, VPN usage in Turkey is quite widespread.

In response to the failed implementation of a tax on social media, the use of VPN services by Ugandans soared. The Ugandan government responded by demanding that local internet service providers block VPN services.

After scrapping the social media tax in favor of a tax on all internet usage, the Ugandan government also implemented an entire internet blackout during the elections. While there is currently no legislation specifically against VPNs in Uganda, they continue to block VPN servers.

In 2016, the UAE revised its laws, making the use of a VPN service “to commit a crime or prevent its discovery” punishable by temporary imprisonment and a fine of up to two million dirham (roughly $540,000).

While there are legal uses for VPNs in the UAE, the country has also placed an outright ban on VoIP calls and numerous websites, including some French TV channels and Netflix. It is illegal to use a VPN to access any of these blocked websites or to place a banned call.

In 2018, Venezuela’s largest internet service provider attempted to block the use of Tor and VPN services, presumably on government orders. However, there are no specific laws against using VPNs in Venezuela at present.

Countries where VPNs are illegal

The countries below have passed laws directly or indirectly prohibiting the use of VPNs.

The Belarusian government has worked to restrict its citizens’ access to the outside internet for years. In 2015 it banned both Tor and VPN services, although it appears Belarusians have found ways to circumvent the technological and legal barriers.

China has perhaps gone the furthest of any country to ban and block VPNs and Tor. Any VPN service must be licensed by the Chinese government. Those that are not will be closed if they are in-country or blocked if they are based in a foreign country. China is one of the few countries in the world that has complete control of all the local internet service providers, and they use deep packet inspection to monitor internet traffic in and entering into the Chinese cybersphere. They are generally able to identify and block VPN traffic.

In 2013, Iran attempted to block access to VPNs based in foreign countries, only allowing VPN services that are licensed and registered with the Iranian government. While selling or promoting VPNs is a crime and citizens can be punished for using a VPN, VPN use among citizens and even government officials is still very common.

In trying to deal with ISIS’s online presence, the Iraqi government has gone to extremes — not only banning VPN services and social media, but also instituting rolling blackouts of the internet across the country. Although the country is no longer under siege by ISIS, its draconian internet restrictions remain in place.

In 2010, Oman passed a law that prohibited individuals from using VPN services. Anyone caught violating this law is subject to a 500 rial fine (roughly $1,300). Companies can apply for a permit to use a government-approved VPN, but if a company is found to be breaking the anti-VPN law, it faces a 1,000 rial fine.

Even before it invaded Ukraine, Russia had taken strong legal action to control free speech and access to information both within its borders and online.

The Russian Duma passed the Yarovaya Law in 2016 that required VPN services to register with the government and log their users’ online activity. In 2017, the Duma passed another law requiring approved VPNs to block their users from accessing certain websites targeted by the Russian government. Those that did not were threatened with bans.

Proton VPN does not have a presence in Russia, so we are not subject to these laws and have never complied with them. Furthermore, we do not log any information about what you do online or location-based information.

Since the start of the ongoing war in Ukraine, the Russian government has attempted to block access to all the international news and social media outlets that have been critical of the war or presented evidence that counters the government’s domestic disinformation campaign.

This caused a massive increase in demand for VPN services that can overcome these censorship blocks, leading the Russian government to go to great lengths to block VPN services themselves.

Proton VPN is committed to fighting for the right of Russian citizens to access the uncensored internet and has so far been largely successful at evading efforts to block our service in Russia. This is a constantly evolving and difficult situation, but we will continue serving the needs of the Proton community in Russia.

Turkmenistan is one of the worst countries in the world for internet freedom. There is an outright ban on VPNs in this country, with reports of citizens being required to swear on the Koran that they will not use one before they are able to have an internet connection installed. There have also been reports that the authorities in Turkmenistan will stop people in the street and search their smartphone to ensure they do not have a VPN installed on their device.

Where are VPNs legal?

Using a VPN is legal in the vast majority of countries, but using a VPN to break the law is not. So using a VPN to infringe on copyright or for hacking purposes is still illegal, even though the use of VPN itself isn’t.

No countries accept private browsing as an inalienable human right, so it’s important that everyone continues to defend the ability to legally use a VPN, even if you live in a country where VPN usage is unrestricted.

For example, the UK government has repeatedly attempted to block, repeal, or break privacy and security methods, such as end-to-end encryption, and has also implemented the Investigatory Powers Act, allowing them to access citizens’ browsing data. So while VPNs remain entirely legal in the UK, it doesn’t mean they always will be.

Similar anti-privacy moves are being made by governments around the world, including in countries where VPNs are legal.

Why are VPNs illegal in some countries?

If there is a commonality among all the countries on this list, it is that their governments want to control the information their citizens have access to. These governments are afraid that if they had to compete in the marketplace of ideas, they would lose. Instead, they have resorted to the 21st century equivalent of shutting down newspapers and burning books.

Our mission is to provide an internet that is free and secure. Until that day arrives, we will continue to offer a free and unlimited VPN service to support those who do not have other means to access the information they need.