Home › Articles & News › Tell us where to install our next servers!

Tell us where to install our next servers! 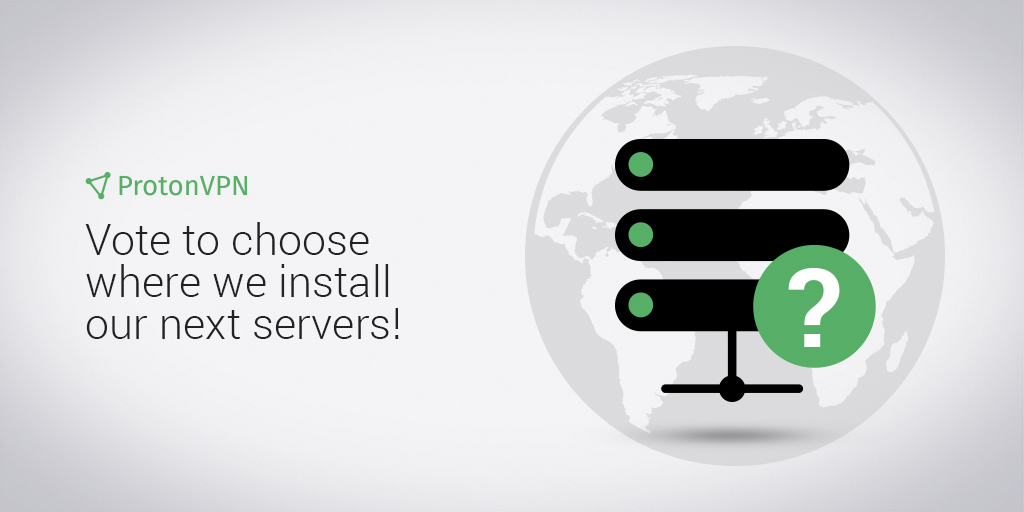 Our last server poll was such a success that we are holding another! This is your chance to decide where we should place our new VPN servers.

It has been almost a year since we held our last server poll, in which nearly 13,000 of you told us which countries to install Proton VPN servers in. Since then, we have added hundreds of servers in over a dozen countries — and a new native app for iOS! Our rapid expansion over the past year was necessary to keep up with our growing user base, and we have quickly installed servers in all of your top-choice countries. So, once again, we need your help to decide where we should install our next servers and which countries to prioritize.

Just like last time, you have one vote to select the country you think should be our highest priority. We have excluded any countries where we already have a server (to see a complete listing of our servers, click here) or where we feel it would not be possible to provide a secure server (to see the steps we take to protect Proton VPN servers in high-risk countries, click here). The poll will be active for at least two weeks, so you have plenty of time to decide. And please share this poll with your friends. Everyone is eligible to participate.

Once the poll is closed, we will tally the votes and post an update with the results. Then we will begin installing new servers in the countries you chose.

Thank you all for your continued support of Proton VPN. Our paid members allow us to fight for an Internet that is secure, private, and free.