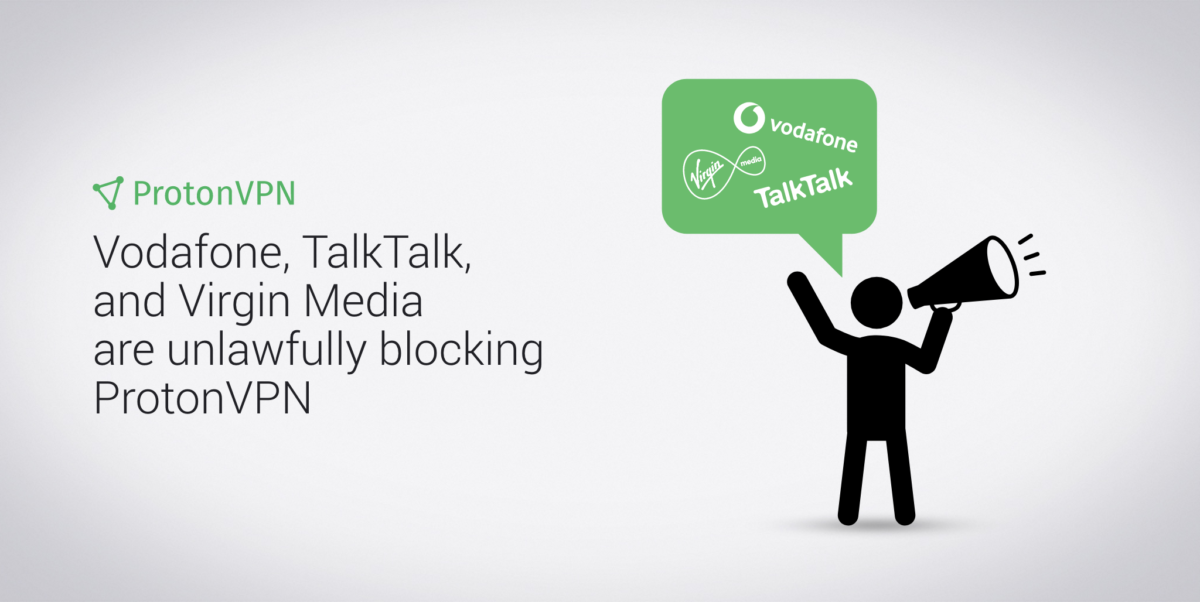 Following months of inaction from Vodafone, TalkTalk, and Virgin Media, we are making a public appeal to them to lift their block on our VPN services or face a formal complaint to Ofcom, the UK telecoms regulator. These Internet service providers (ISPs) have blocked the Proton VPN website since early August, even though the British Board of Film Classification (BBFC), a pertinent regulatory authority, issued instructions that VPN services should not be proactively blocked. These blocks have prevented many of our UK users from accessing our services for months. We were first made aware of the block through complaints from users and reports on the website blocked.org.uk.

We have followed all the proper channels in trying to get these blocks removed. We have written to and called these companies repeatedly, requesting the block to be lifted so that our UK users can access our services once again. We even resorted to tweeting at them to see if that would spur them to action:

However, despite our best efforts, these three ISPs have not acted, forcing us to prepare a formal complaint to the regulatory authority.

The effect of the block

The block effectively means that if you are a Vodafone, TalkTalk, or Virgin Media user, you cannot access the Proton VPN website or app. If you try to open our site, you see a message from your ISP stating they have restricted access to this site because it allegedly contains adult material. This block is applied against individuals that already have a Proton VPN account and potential new users.

In most cases, users have to update their ISP’s parental controls to unblock our website and app manually. That our site and app are filtered out by default by these ISPs is concerning for two key reasons:

This overzealous filtering of the Internet, along with the UK’s Investigatory Powers Bill, is part of a troubling trend of British politicians trying to monitor and censor the Internet in ways that sound more like methods Russia, China, or Kazakhstan would use.

Why have we been blocked?

In 2014, the UK government passed legislation that required mobile and Internet providers members to restrict access to “adult” websites by default unless the parental controls governing a person’s Internet connection are updated. This law is meant to prevent underage users from accessing inappropriate material such as gambling sites or pornography. While users are in charge of their parental controls and can decide whether to activate them or turn them off when they set up their account, the reality is that this option is often buried deep in the menu, and the parental controls option is pre-selected.

Proton VPN was erroneously included in the Internet filter these ISPs enacted. According to the guidance of the BBFC, VPN services should not be proactively blocked, a ruling it has made repeatedly.

In most cases, users can update their parental controls to unblock their connection. You can normally find this function in Vodafone, Virgin Media, or TalkTalk’s account settings. Unfortunately, it’s not immediately apparent that this is an option, leaving many people stranded.

However, we are concerned that there may be people who want to keep parental controls in place to limit their children’s access to inappropriate material, but also want to protect their privacy with Proton VPN. The solution cannot be to force users to choose between online privacy and protecting their children, especially when there is no adult or inappropriate material on our website or apps.

What are other mobile providers doing?

Quite a few ISPs in the UK take guidance from the BBFC on whether certain websites should be blocked. The BBFC has ‘whitelisted’ Proton VPN, meaning we should be available on all ISPs. The BBFC also runs a Mobile Classification Framework, which allows anyone who thinks a website is being improperly blocked lodge a complaint. Vodafone is a notable participant in this framework. If you are a Vodafone user and you would like to use Proton VPN to secure your online activity, please send an appeal to contentclassification@vodafone.com.

There are a handful of other companies that do independent assessments of which sites to block. Some companies, like EE and O2, inappropriately blocked us but restored access once we notified them of the error. Virgin Media has responded to our letters, stating that they are not “actively blocking” our site and that the parental filter is under the control of the user. However, this elides the point that the BBFC ruled that VPN services should not be subject to such a parental filter. And Vodafone and TalkTalk, by comparison, have chosen to ignore the situation completely.

We are preparing our formal complaint and considering other legal proceedings. Obviously, we hope these three Internet providers will do the right thing. However, if we continue to come up against a wall of silence, we will be left with no choice but to take legal action. To all our users who have not been able to access our website because of these blocks, thank you for your support and your patience. We will restore your access to a private and secure Internet.

Here is an archived version of blocked.org.uk, showing the blocks as well.