Home › Articles & News › We are opening up our free VPN to the general public – now available for download!

We are opening up our free VPN to the general public – now available for download!

Posted on September 7th, 2017 by Proton Team in Articles & News. 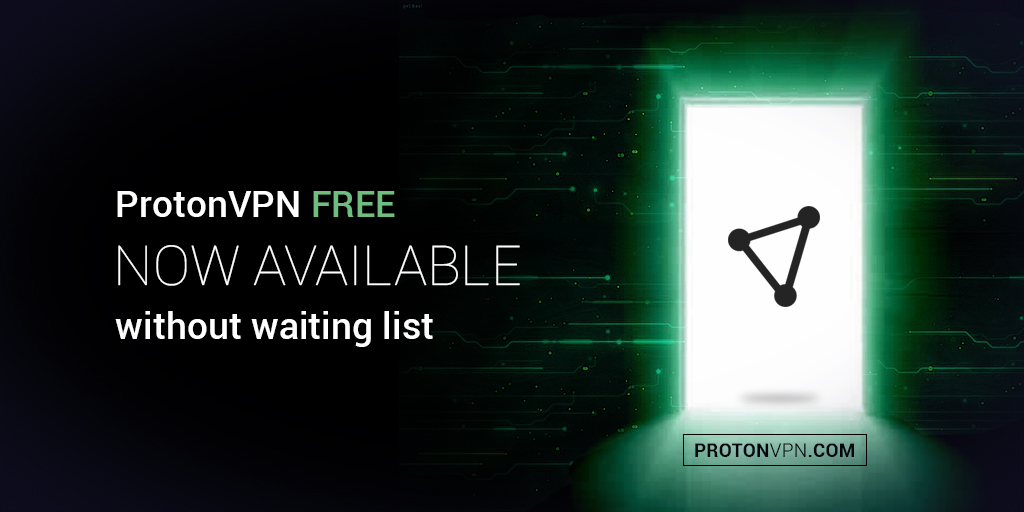 Back in June 2017, we launched Proton VPN to provide a more secure VPN. Within 24 hours of launch, excessive demand meant we had to add a waiting list for our free VPN service. Today we’re happy to announce that free VPN signups are open again.

Get your free Proton VPN account by signing up here.

Today marks another important milestone in our mission to provide secure internet to the entire world. Now it is possible to get a free VPN account instantly without having to wait on a waiting list. In order to support this, we have been working hard over the past 3 months scaling Proton VPN’s infrastructure. In the past month, over 100 servers were added to Proton VPN’s global network, all connected to high bandwidth Gigabit connections.

Proton VPN was born from our mission to safeguard privacy in the digital age. After creating the world’s largest secure email provider, we’ve repeatedly witnessed the increasing infringement on user privacy on the Internet, and we built Proton VPN in order to counteract this, and ensure that the Internet remains a force for freedom everywhere.

While there are a number of free VPN providers in the market, Proton VPN is the only free VPN service that is serious about user privacy. The vast majority of free VPN services available today actually provide the complete opposite of privacy because they are actually secretly selling user browsing data or connection for profit (Anchor Free, Hola, etc). Additionally, unlike other free VPN services (TunnelBear, Windscribe, Hide.me, etc.), Proton VPN’s free VPN service does not monitor user traffic or log traffic volume or session times, because we have no bandwidth limits or traffic caps.

In other words, Proton VPN is truly an unlimited free VPN service that has a strict no-logging policy, and comes with a long list of VPN security features. This unique combination of factors has made Proton VPN’s free VPN service much more popular than we expected, which is why we were not able to meet the initial demand. Thanks to the continuous work from our server team, we have finally been able to add enough server capacity to now remove the waiting list and we look forward to providing VPN security to millions of people around the world.

For those of you who wish to support Proton VPN, purchasing a paid plan provides additional VPN security features such as our Secure Core network which adds an extra layer of protection against sophisticated network based attacks, and the ability to route traffic through the TOR network. Proton VPN paid plans also come with much higher speeds, the ability to connect multiple devices at the same time, and support for P2P traffic. Proton VPN is entirely funded by the support of paid subscribers, so by upgrading to a paid plan, you are also making it possible for us to provide secure internet to millions around the world who don’t have the means to pay for a VPN service.

Follow us on Social media to stay up to date: