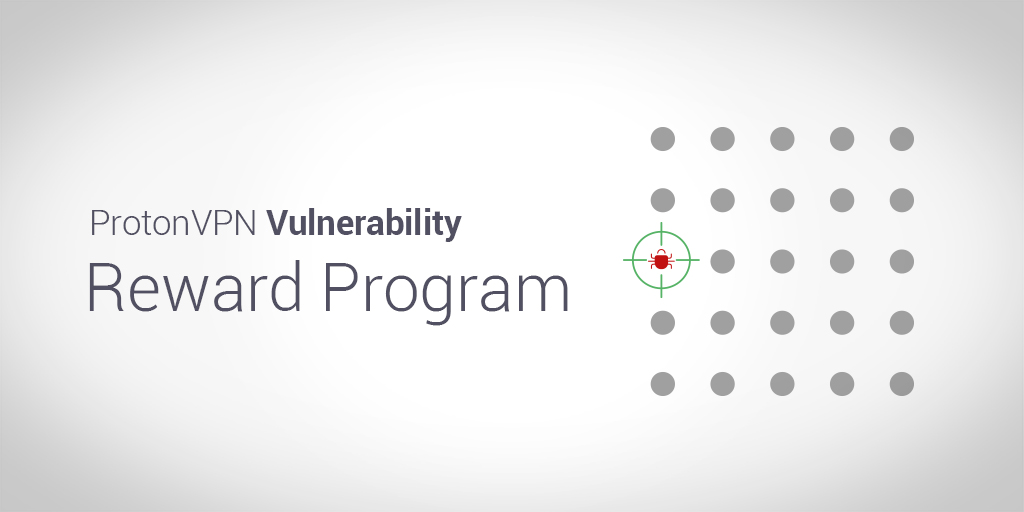 As with Proton Mail, we have built Proton VPN with an emphasis on security. Today, we are launching a Bug Bounty Program to further enhance Proton VPN’s security.

In operating a VPN service, security is required not only for the VPN connections and protocols themselves. Security is also needed for the underlying server infrastructure, the web pages and dashboards, the VPN applications themselves, the payment system, and also the user databases. To properly protect user privacy, we need to protect all aspects of the service from compromise.

In building Proton VPN, we drew upon the security expertise we have gained from running the world’s largest secure email service. We have also been working together with Proton Mail security contributors and the broader community on strengthening all aspects of Proton VPN. Recently, we worked together with long time Proton Mail security contributor Mazin Ahmed to complete a comprehensive security audit of Proton VPN and add additional hardening.

Our bug bounty program allows us to extend the work that we already do on a daily basis to protect Proton VPN users. For this reason, now that Proton VPN has officially launched, one of the first things we are doing is launching the Proton VPN Bug Bounty Program. With this program, we are inviting security experts from around the world to try to find weaknesses within Proton VPN, and we will be paying rewards (bounties) for security issues which are reported to us through this program. If you are a security researcher, you can also participate in the Proton Mail Bug Bounty Program.

Scope: The program is limited to the servers and the web, desktop and mobile applications run by Proton VPN. Our profiles on Facebook, Twitter, Linkedin, Eventbrite, etc, do not qualify. Qualifying sites include:

The Proton VPN applications on Windows, MacOS, Linux, iOS and Android are also included in this program.

Judging: The judging panel to determine awards consists of Proton VPN and Proton Mail developers assisted by one or more outside experts who are part of our security group. Program participants agree to respect the final decision made by the judges.

Responsible Disclosure: We request that all vulnerabilities be reported to us at security@proton.me. We believe it is against the spirit of this program to disclose the flaw to third parties for purposes other than actually fixing the bug. Participants agree to not disclose bugs found until after they have been fixed and to coordinate disclosure with our team through our release notes to avoid confusion.

Responsible Testing:  Please do not hack user accounts, corrupt databases, or leak data that might be sensitive. We also discourage vulnerability testing that degrades the quality of service for our users. If in doubt, feel free to contact our Security Team at security@proton.me.

Adherence to Rules: By participating in this program, you agree to adhere to the above rules and conditions. All rules must be followed to be eligible for awards.

Any design or implementation issue that substantially affects the confidentiality or integrity of user data is likely to be in scope for the program. This includes, but is not limited to:

We believe in working closely with security researchers and are willing to share technical details such as API specifications, source code, or infrastructure details with selected researchers with the aim of improving security for all Proton Mail users. Please contact security@proton.me for more details.

Sometimes, bounties are awarded for suggestions for improvement which don’t fall into any of the above categories. This is determined on a case by case basis by our team. These include things such as:

The size of the bounty we pay is determined on a case by case basis and largely depends on the severity of the issue. To be awarded a bounty, you usually need to be the first person to report an issue, although sometimes exceptions are made. Rough bounty guidelines are provided below:

Please report issues to security@proton.me. Issues should be reported with clear instructions on how to reproduce the issue and/or proof of concept.