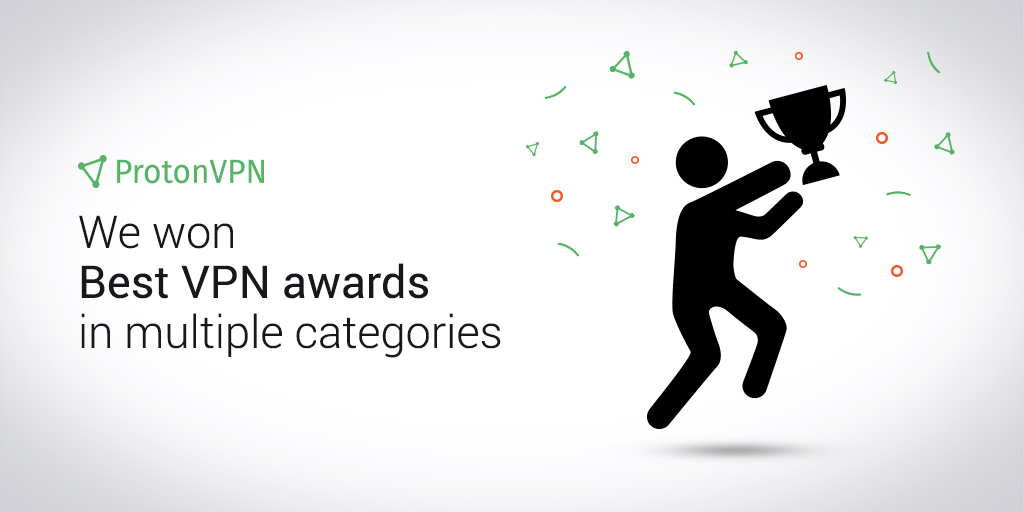 This year, we received recognition for some of the unique advantages that our VPN service offers. Here are some of the awards for 2018 and 2019 that were just announced.

Editor’s Choice for Best Free VPNs for 2019 by PCMag.com

PCMag is one of the most respected outlets covering computers and technology news. Its first issue, back in 1986, featured an interview with a young Bill Gates. Ever since that auspicious beginning, PCMag has enlisted industry experts to evaluate the latest software and hardware developments.

Because of [their] flexibility, and Proton VPN’s commitment to security, we think it’s the best free VPN available…
The company offers a rare, truly free experience that doesn’t limit your bandwidth or push ads.

2018 Best VPN for Android from uptodown.com

UptoDown is the world’s second most popular software catalog for Android apps, behind only Google Play. They are an authority on everything Android. Based in Spain, they reach over 90 million international users each month.

It’s easy to get lost in the world of VPNs available on Android. Every day a new one appears and most of them make promises they don’t intend to keep. It’s hard to find a trustworthy free VPN app and that’s why we’re so impressed with Proton VPN… Your privacy is what’s most important and Proton VPN knows it. That’s why it doesn’t keep any record of your online activity. In these times of scandals about leaked data by companies, it’s always nice to see a service like Proton VPN.

ProPrivacy is a well-known VPN review site. Starting in 2018, they launched their annual VPN awards. For the second year running, Proton VPN won their prize for Best Free VPN.

What they said in their review:

Proton VPN imposes no data limitations on its free users, which is fantastic… [This] makes it very feasible to use the free VPN plan as a fully-fledged VPN service.
Free users do not have to suffer ads.
…the free service performed very well in our tests, with a 45 Mbits/s result that was probably only capped by our 50 Mbits/s internet connection.

After Proton Mail, pretty much everyone was expecting something special with Proton VPN. By-and-large, Proton has delivered.
Proton VPN is an excellent and highly competitive premium VPN service. [Their free service is] limited to just three server locations, but with no data limits and speed results that are better than most paid-for services.

Best VPN for Free 2018 from VPNpro.com

VPNpro is one of the newer VPN review sites, but they have already attracted quite a following (we’re definitely following them). Their thorough reviews, comparisons, VPN ratings, and other resources “can steer you out of harm‘s way and toward a borderless, unlimited digital world!”

Our Proton VPN review team has made our stance on free VPN services very public. They’re either getting money from you in less transparent ways, or they’re so restricted as to be borderline useless…. BUT, [the Proton VPN Free Plan] will not limit your bandwidth, how much you can download, or how many times you can switch servers. That’s the best free VPN deal we’ve seen so far.

While recognition is nice, our primary goal isn’t to win awards but to make a secure and private Internet available to everyone. For this reason, the most important feedback for us is from the Proton community, so follow us on social media and let us know what you think!