Home › Privacy basics › What is bandwidth throttling? How to tell if your ISP is limiting your internet

What is bandwidth throttling? How to tell if your ISP is limiting your internet 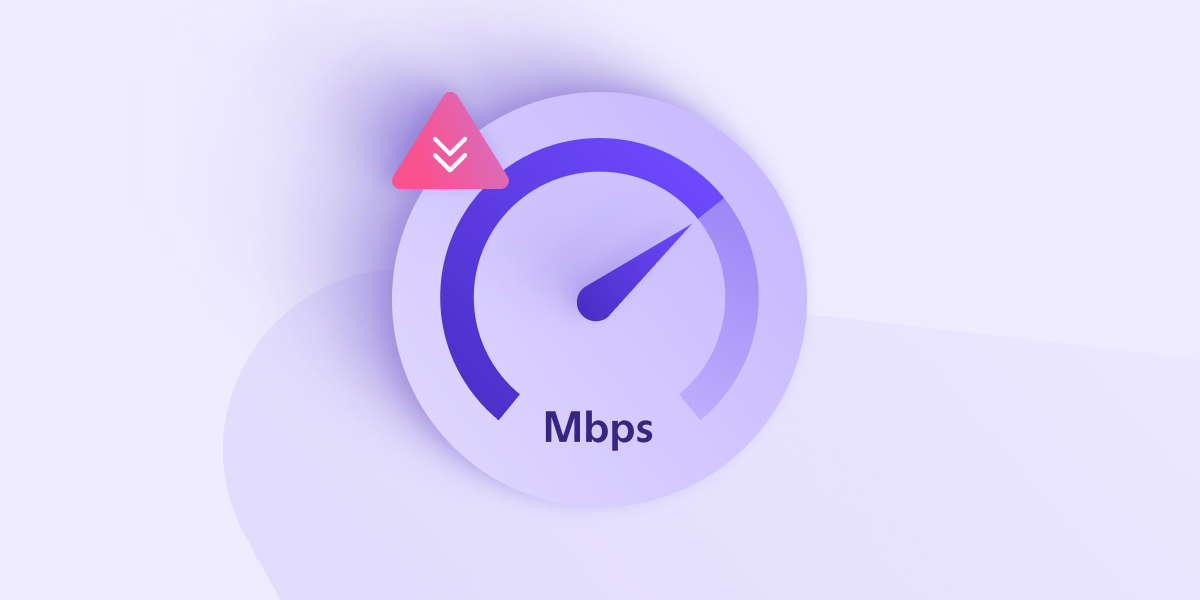 If you think your internet is not as fast as it should be or that videos are constantly buffering, it could be that your internet service provider (ISP) is deliberately throttling your bandwidth. Here’s how you can find out if you are the victim of bandwidth throttling and how to circumvent it.

What is bandwidth throttling?

Bandwidth throttling is when your ISP intentionally slows down your service. Throttling limits the flow of data to and from your device by restricting the speed at which you can process data. Any ISP can throttle your bandwidth, though it’s more common with mobile and wireless ISPs.

Bandwidth measures how much data can be transferred in a given amount of time (typically one second). When your ISP throttles your bandwidth, it’s artificially restricting how much data your internet connection transfers, resulting in longer load times for websites, apps, and other online content.

Why do some ISPs throttle your bandwidth?

There are many reasons an ISP might limit your bandwidth, including managing network congestion and slowing down connections to websites that did not pay for “fast lane” network priority.

ISPs may throttle your internet speed to better manage network congestion at peak times when many people are using the internet all at once. As more people use the internet, they use more bandwidth, increasing the network’s congestion. ISPs throttle everyone’s bandwidth at peak times to make sure new connections are not blocked. This can be why you experience slow internet speeds at certain times of day but not others.

Although it would be preferable for your ISP to add more bandwidth to its network, that’s not always possible, particularly for providers that deliver internet over wireless or satellite connections. In these cases, limiting bandwidth is the easiest solution to network congestion.

Sometimes, your ISP will throttle your connection when they notice you’re torrenting, gaming, or streaming, all of which require large amounts of bandwidth. ISPs do this to ensure normal service to customers that use less bandwidth.

If you are on an internet plan with a data cap, your ISP may throttle your bandwidth when you reach your data cap instead of cutting your data off altogether. When this happens, you will experience slow connection speeds until your next billing cycle begins, and then your ISPwill restore your usual speeds. Whether your ISP throttles your data or cuts it off altogether depends on your carrier and your specific plan’s details.

Data limits are most with mobile ISPs as most fiber and cable broadband providers do not generally sell plans that have data limits.

The most controversial type of bandwidth throttling is paid prioritization. Instead of providing you with a standard amount of bandwidth regardless of which website you visit, paid prioritization is when an ISP accepts payment from a website or services to pay in exchange for extra bandwidth. This allows that website to buy a “fast lane” and have its traffic prioritized,  giving its users faster service than other websites that don’t pay for a fast lane.

Bandwidth throttling is legal and, in many cases, necessary. The majority of bandwidth throttling happens when ISPs try to limit the congestion on their network and maintain reliable service for their customers. If ISPs could not manage demand, you might not be able to connect during peak traffic times.

In the US, the 2015 Open Internet Order made throttling illegal unless it was for “reasonable network management” or to meet other technical needs. However, the FCC repealed the rules protecting the open internet in 2017, thus legalizing paid prioritization and other kinds of blocking and throttling.

How to check if your ISP is throttling your internet

You cannot always tell when your ISP is throttling your bandwidth as it does not have to inform you when it restricts your internet, and many other factors can slow down your internet speed. However, you can use a VPN to check if bandwidth throttling is causing your slow internet.

1. Use a speed checker tool to measure your internet speed

Before you can determine if your ISP is throttling your internet, you need to measure your normal internet speed. You can do this using an online speed test such as speedtest.net or fast.com and following the on-screen instructions.

Your results will include your ping, download speed, and upload speed. Write these measurements down. For more accurate tests, you can check your connection speed using two different speed test tools, as different tools may provide slightly different results.

2. Use a VPN to test your internet speed

The next step is to download a VPN for your device. For your test to be accurate, you should choose a VPN with no data limits or artificial speed restrictions.

Once you install the VPN, connect to the nearest VPN server in the app. It’s important to connect to the closest server possible, as connecting to a server further away can slow down your internet speed.

While connected to the VPN server, repeat step one by visiting the same speed test tool and taking a new reading of your internet speed.

If you see that your internet is faster while connected to a VPN, your ISP has likely imposed a bandwidth limit on your connection. This may only be the case during peak times, so you should perform this test throughout the day to discover when your internet is affected.

How to stop bandwidth throttling

The method for stopping your ISP from throttling your bandwidth depends on why they’re limiting your usage.

Although you cannot use a VPN to bypass your ISP’s data limits or to circumvent paid prioritization, you can use a VPN to prevent your ISP from monitoring your online activity and using that information to slow your traffic.

If you primarily use a mobile or other wireless ISP, switching to a fiber or broadband provider should increase your bandwidth. Mobile ISPs are more likely to suffer from network congestion and throttle customers’ bandwidth more often as a result. However, switching ISP is understandably not an option for everyone.

If your ISP throttles your internet because you hit your data cap, you may want to either reduce your overall data usage or upgrade to a plan with a higher cap. Some mobile ISPs offer unlimited data plans.

You can prevent your ISP from throttling your internet and stay private online by using Proton VPN. Proton VPN offers:

Proton VPN doesn’t impose any artificial speed restrictions on your internet connection. We also provide unlimited bandwidth to everyone who uses Proton VPN, even on our Free plan, making it the best tool for testing your internet speed and circumventing throttling.

Bandwidth is the volume of information that can be sent over your connection in a second. The measurement for bandwidth is normally Mbps (notice the lowercase b) which is megabits per second. One megabit is one million bits, so if you have an internet speed of 60 Mbps, that’s 60 megabits per second.
Do not confuse Mbps with MBps (notice the uppercase B), which is megabytes per second and is normally used to measure how quickly files are downloaded or uploaded.

Will a VPN stop bandwidth throttling?

Will a VPN slow down my internet?

Using a VPN will slightly slow down your internet connection. This is because a VPN works by routing your traffic through a VPN server, which takes extra time. However, using a fast VPN with no speed limits will reduce the impact on browsing speeds so that it is hardly noticeable.