Posted on February 13th, 2020 by Richie Koch in Privacy & Security. 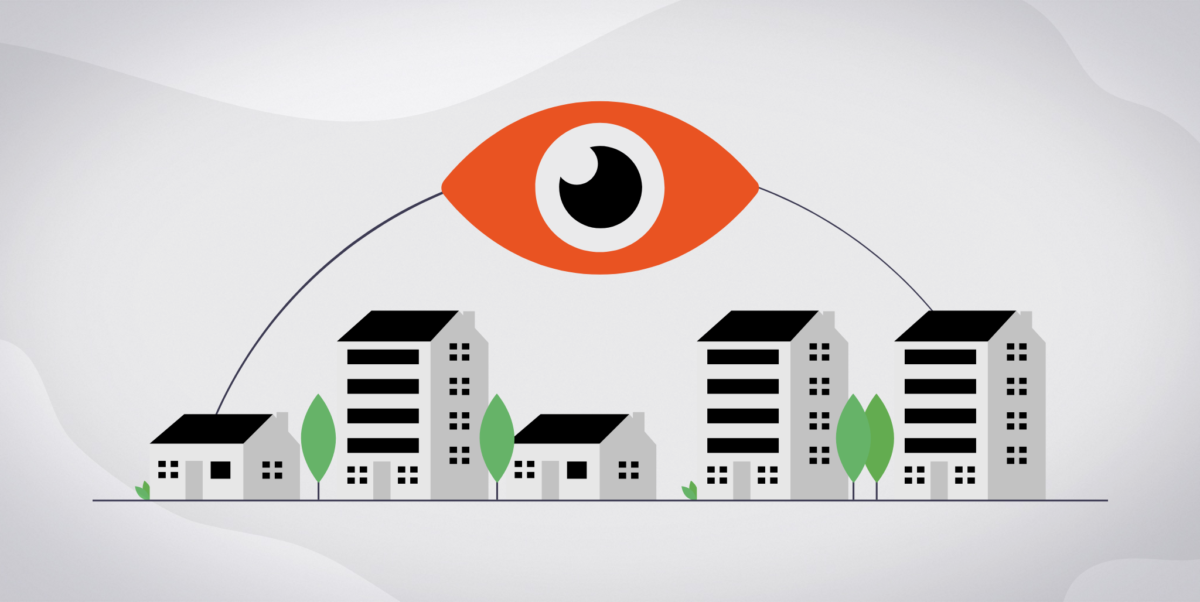 Internet companies already follow your every move online: Now they are partnering with law enforcement to bring that same level of surveillance to the physical world. Amazon Ring, the creator of a popular camera-equipped doorbell, has entered into secretive partnerships with hundreds of police departments across the United States. These agreements often require police officers to promote Amazon Ring devices in their communities and potentially grant police departments access to video footage recorded by local Ring users without the need for a warrant.

This post examines the potential for police and corporations to abuse Ring surveillance. It has paved the way for new forms of mass surveillance, turned police departments into Amazon sales teams, and further reinforced the expectation that you will always be under some form of monitoring.

This article is part of our ongoing coverage of privacy and surveillance. You can read more stories like this in the privacy section of our blog.

Ring is a smart device home security company that Amazon acquired in February 2018 for about $800 million. The company’s main product is the Ring Video Doorbell. It uses a motion sensor to activate a high-definition camera, which streams its feed to a mobile app on the homeowner’s smartphone. The smart doorbell also has a microphone that homeowners can use to interact with anyone near the door. Ring also sells other types of security cameras.

In 2018, Ring launched its Neighbors app. It allows Ring’s millions of users to join hyperlocal social networks where they can report crimes, crowdsource information about suspicious events, and share video footage captured by Ring devices with their neighbors. In addition to linking Ring users with each other, the Neighbors app allows local police departments onto the social network, where they can access public discussions and collect publicly shared videos. Police officers can chat and interact with anyone on the Neighbors app who is within their jurisdiction.

Amazon has worked hard to win over police departments by offering free devices and throwing parties for police officers. In return, Ring invites police departments to partner with Amazon to get access to Ring’s “Law Enforcement Neighborhood Portal,” which allows officers to use an interactive map to request video footage captured by Ring devices from a specific time and area. Over 700 police forces across the US have entered this partnership.

Officers do not need a warrant to request this footage. They just need the permission of the Ring user before they can view it.

Police officers can make bulk requests for every video recorded by a Ring device in a certain area within a certain time frame. Ring sends out an automated email to every Ring user who has a device in that area. Ring users are free to decline these law enforcement requests and can unsubscribe from receiving similar requests in the future. However, Amazon has coached police on how to persuade people to share footage.

Here’s the police video-request email Ring sends to users. Note the difference between the big “Share now” button and “Please unsubscribe” link. Also: “If you would like … to make your neighborhood safer, this is a great opportunity.” (Who could say no?) https://t.co/db4w8nDzey pic.twitter.com/Rv8ffccR2R

Here’s where this story gets even more uncomfortable. Amazon encourages police to use social media, town hall meetings, and other outreach activities to push citizens to buy and use Ring. Amazon often explicitly requires active promotion of Ring products and the Neighbors app in its partnership agreements.

Additionally, police departments that partner with Amazon may not publicly speak about Ring devices or the Neighbors app without giving Amazon a chance to review and revise the statement. This control extends from press releases down to how police officers comment on citizens’ posts on social media. In one instance, Ring barred officers from using the word “surveillance” when talking about its products.

Turning public servants into Amazon salesmen and giving Amazon the power to script their speech seems like a clear violation of the public trust and an abuse of taxpayers’ money. But to make matters worse, all of these agreements include confidentiality clauses that prevent the public from learning more about how police departments and Amazon interact.

Creation of a surveillance network

One of the biggest problems with Ring is that once the company captures your image, it’s no longer in your control. It’s a problem similar to what happens anytime you post a picture of yourself on the Internet. Except with Ring, it happens without your consent; all you have to do is walk by a house.

Because the police do not need a warrant, Ring partnerships are an ideal vehicle for police to gather mass amounts of video footage. Police forces can keep videos indefinitely, even if they turn out not to be related to any investigation. Once they collect this footage, police departments can analyze it with facial recognition software or share it with anyone, including other law enforcement agencies, without providing any evidence of a crime.

Police aren’t the only ones using surveillance videos. Amazon uses them to sell Ring. In June 2019, Amazon posted ads on Facebook showing unredacted photos of people whom other users have accused of crimes.

When individuals began to question whether these ads were a violation of privacy, Buzzfeed did some digging and discovered that Ring users “grant Ring and its licensees an unlimited, irrevocable, fully paid and royalty-free, perpetual, worldwide rights to exploit Shared Content for any purpose.” Essentially, Amazon can use footage that was meant to be used to protect neighborhoods for its own financial gain and not share what it makes with the individuals in the video.

And just in case empowering the state with a vast surveillance network was not enough, the Electronic Frontier Foundation found that the Ring app is packed with third-party trackers that share personally identifiable information with marketing companies. The app shares Ring users’ names, IP addresses, and sensor data, along with other sensitive information.

In short, Ring has exploited our desire for safety (and the fear of the other) to build a nationwide, for-profit surveillance network.

On Amazon, @ProfFerguson says: “If you wanted to design a perfect surveillance state, you’d have wiretaps in every house, cameras in every door (and) a network of informants who tell you when anything is happening … We’ve created Dystopia Prime b/c it’s just so darn convenient”

Halt the spread of surveillance

Amazon knows Ring is an assault on everyone’s privacy. It says so in Ring’s Privacy Notice: “Capturing, recording or sharing video or audio content that involves other people, or capturing others [sic] peoples’ facial feature information, may affect their privacy rights.”

To people considering buying Ring, we suggest you look at other closed-circuit alternatives. To current Ring users, try positioning your camera so that it doesn’t face the public street and only looks out over your property.

At Proton, we believe constant surveillance prohibits people from having the space to think and develop. It is a subtle and unjust form of control that undermines the right to privacy necessary for a democratic society. Ring doorbells are a great convenience, but they do not protect our privacy rights. People should be free to walk through their neighborhood without fear of their actions being recorded — and potentially misjudged.

Ring’s secretive agreements with police departments and dragnet approach to video surveillance undermine community members’ trust in both the police and their neighbors. It is the exact type of surveillance that we oppose.

We will not stop fighting for privacy and freedom, both online and off.